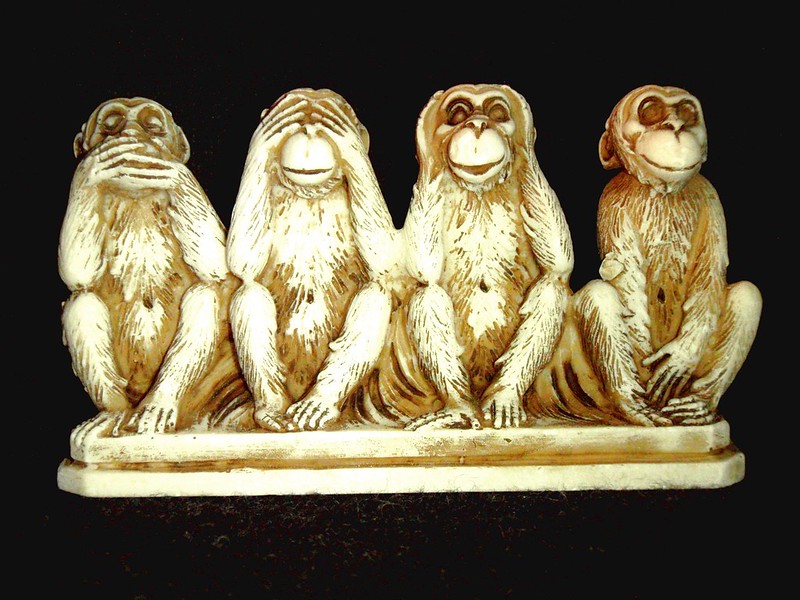 Perhaps it’s time to start telling all the tales I dreamt of telling when I was a child.
Tales I haven’t told yet because I was waiting for someone to ask for them.

And what if no one ever asks for them?

Do I die alone with them?

And no one is asking for them.

No one is asking for them.

You’re making the presumption that anyone will ever care about the modest scribblings you’re making in the dark of the morning.

And I start to wonder what they would find if I keeled over dead at my typewriter.
What unwritten stories would they find?

I leave the bar with renewed eyes.
Tommy’s lottery numbers won the horse race and the Universe shines a light down on me.
I am Saul becoming Paul on the road to Damascus and life has new meaning.

Tell the tales before the sun sets on me.

I leave the bar and walk out onto the street where I see a statue of the three wise monkeys sitting on a bench.
See no evil. Hear no evil. Speak no evil. 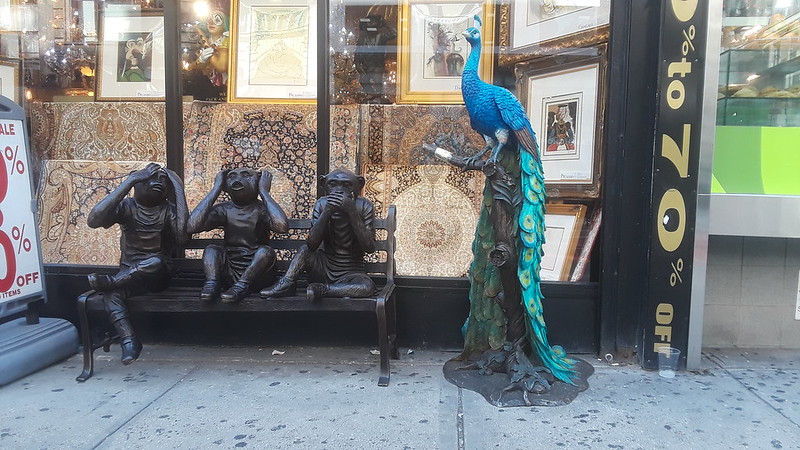 And I think back to when I was a child visiting my great-grandmother’s house in Willow Springs, Missouri. It was exactly the sort of house you could imagine this sweet, elderly woman living in for years and years. Her husband had passed away many years ago and she lived there solo, her son and her grandson – my father – visiting on occasion to check in on her.
She was a small, delicate woman who somehow managed to outlive three of her children. We thought she would outlive us all. Alas, her time finally came. I remember kissing her delicate forehead at the viewing and thinking of how healthy her skin still was even at that advanced age.

The house was filled with little curios and tchotchkes and knick-knacks.

The Lord’s Prayer and the Serenity Prayer hung on the wall with Jesus’ comforting face gazing down at us.
My father regaled us with tales of familial dysfunction when he and his three brothers were children.
Their father had been married five times, twice to their mother. They had tried to make things work for the sake of the boys but couldn’t manage it. He was too scarred, and she was too bat-shit crazy.
And the boys got shipped around from surrogate family to surrogate family while their father worked tirelessly to keep the railroad going.
The Frisco Rail Lines.
And I loved my grandfather.
He always told me I was going to be a heartbreaker when I grew up.

And I didn’t tell him I loved him before he died from cancer over two decades ago.
Because I was hiding.
Because I was angry.
Because I feared facing his death and what that would mean in terms of my own inevitable demise.
And he worked tirelessly to keep the railroad going.

I remember visiting their house in Willow Spring, Missouri, and my great-grandmother had this small figurine of the Four Wise Monkeys.
And this struck me because I had only been familiar with the Three Wise Monkeys.
See no evil.
Hear no evil.
Speak no evil.
My great-grandmother’s figurine included a fourth monkey.
Do no evil.
The fourth monkey has a serene look upon its face; the arms are down and resting quietly in its lap. He does no evil.

And all I could think of were the four brothers who had grown up in this house.

And all the evil they had to hide from.
All the abuse. All the confusion.
I imagined these four brothers playing as these four monkeys desperate to hide from the evil that ran amok in this house.
And I thought how I should tell that story one day when I grew up.
And the growing up happens faster than expected.
And you suddenly realize that no tomorrow is guaranteed.
Ever.

Where did that time go?

And you suddenly realize that no one is asking for your tales.
But you should tell them anyway.
Because time is fleeting.
And I still hope there are more days ahead of me than behind me.

There were four brothers.
One became a teacher and an explorer.
One became an insurance manager.
One opened a car dealership.
One went into mental health.

My father was the one who went into insurance. The man trying to manage uncertainty. Anticipating every single way a person could die. And then trying to decipher the value of someone’s absence if they did die.
He taught me the value of safety.
But he once told me his biggest regret was living his life in the middle; he never relented to the highs and lows of rapture as I had most of my life.
But I sit here terrified some mornings and he sits comfortably in his retirement home in Florida.
So, I get the rapture and my father gets bliss.
‘Tis the way of things, I guess.
The price I have paid for the life I chose.
And it goes faster than you think it will.

In some ways I have ended up like those monkeys myself.

I came to New York City to take the world on. Divide and conquer. Stand tall over the city and declare victory. Big, brave me. Taking on the big bad world alone.
Alone.
Moving blindly through these streets with my eyes, ears, and mouth covered so I can’t perceive any evil. Any doubt. Any chance of failure.
I move forward through these streets blindly as I try to take them on.

Not just be in New York City.

I want to be of New York City.

I want to be part of its texture and part of its fingerprint.
I want to be a fixture at cocktail parties and just a phone call away from the best tables at the elite jazz clubs and a mover and a shaker. I want to be a happening.
Because if I don’t what becomes of me?
What will be the value of my absence once I am gone?
What will they find of me once I have left?
I feel I have become too painfully aware of the process of life.

Not a journey. More a project.

What am I doing with the time that has been given me?
And why am I screaming this into the night?
I remember singing on street corners in the dead of winter when I first moved to New York and the way it felt as if I was singing into a vacuum. No one was ever going to hear me. My voice would only travel so far before the emptiness of space swallowed it up.

It was the loneliest feeling.

And some mornings I feel the same way as I write these words.
Just standing on a street corner singing into a vacuum hoping someone will hear.
Cover my eyes and my mouth and my ears and see no evil, speak no evil, hear no evil.
Just keep moving forward as blindly as I came into the world.
As clueless as I’ll ever be.
But I feel compelled to shriek this into the void because no tomorrow is guaranteed.
And I have become Paul on the road to Damascus.
I know what I must do and it’s terrifying.
But it’s also the mission.
Like I just got my marching orders from God.
Keep on the straight and narrow.
Keep moving forward and do no evil.
Do only good.
I keep moving forward down the sidewalk.