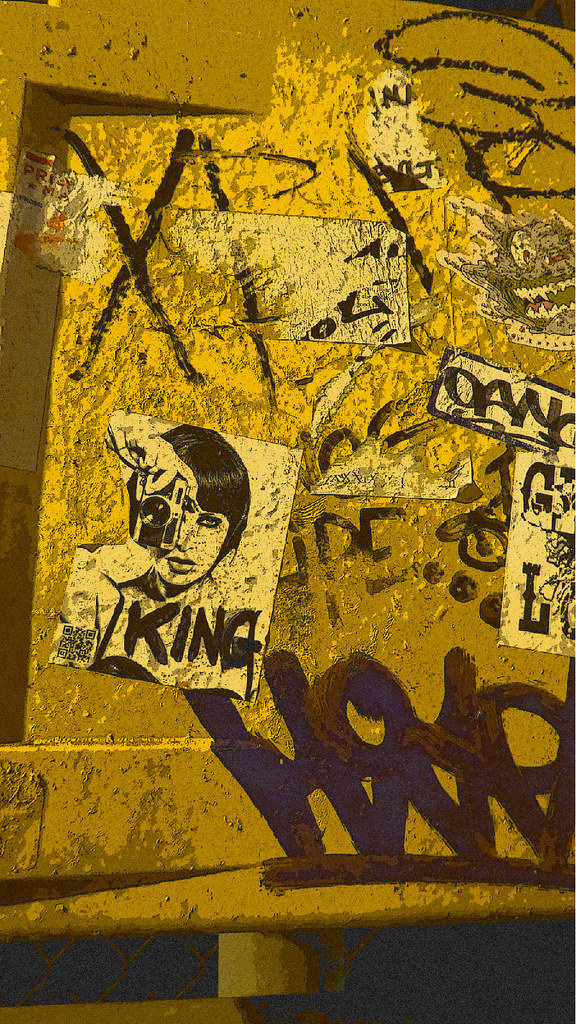 13.1
(We rejoin our hero struggling to cross the Queensboro Bridge.)

I hear the click of her camera’s shutter.
She peers at me from the yellow callbox as I cling to the guardrail.
All around me is silent.
The bridge has stopped moving.
The voices are gone.

With the click of her camera’s shutter, she’s plucked me out of time and space completely.

Just for a nanosecond.
But it feels like hours.
I feel as if I’ve moved to a different part of the clock’s machine. I have leapt from the quicksilver second-hand gear and am now standing on the slow-moving gear that turns the methodical hour-hand. It doesn’t seem to move at all unless you stare at it for minutes at a time.

The face studying me from the yellow callbox reminds me of my ex-wife when I first met her at a mutual friend’s party. She spent the whole night standing behind the lens of a small Pentax camera she had. She watched us all with a wry smile that night, snapping pictures of everyone coyly.

“Look sharp,” I hear the figure behind the camera on the yellow callbox say with a laugh.

I hear the click of a camera shutter again.

A shock of electricity surges through the metal of the bridge. Like the flash on her camera.
I let go of the bridge’s guardrail, startled by the shock.

And I feel a photo appear in my cold hand.

13.2
Everything around me remains silent.
I look at the photo that has materialized between my fingers.

A close-up of me at my most frightened. Most isolated. Most bereft.
As if the photo is meant to sit alongside the painting of the two lovers still strapped to my backpack.

The painting of two people at their most content.

The photo in my hand is an image of someone at his most disaffected.

I look into my own terrified eyes.
Out of space and out of time.

Maybe I won’t go back.

I’ll stay here on this bridge, nestled in this pocket that sits outside of time and space.
Marooned forever next to the yellow callbox, sitting pretty between seconds on the clock where nothing can touch me.
Nothing can wound me.
No one can see me.

No one can touch me.

Is that where I want to spend the rest of time?

Do I want to spend the rest of existence marooned between seconds on the clock with nothing more than an avatar of my ex-wife staring at me from this yellow callbox and a photo of me at my most pained burning a hole through my soul?
What do I do with this?