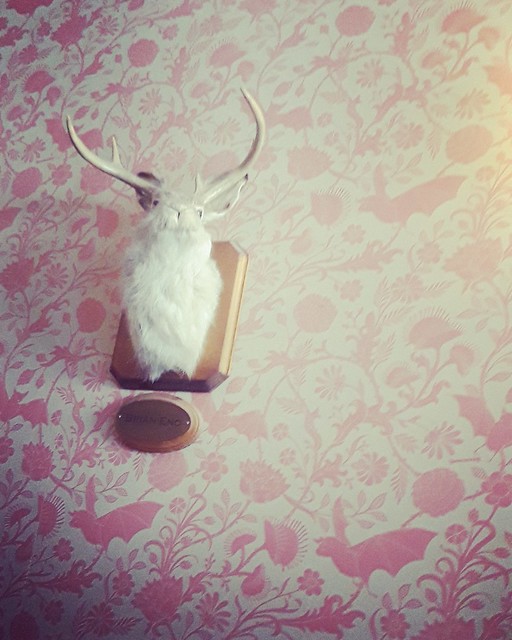 (We rejoin our Dharma Drunk heroes as they continue to rove the streets somewhere between Queens and Brooklyn.)

“They stuffed Brian Eno,” Marylou says as we take up residence at the elbow of the bar tucked away in the corner of the next establishment we wander into. She points up to the incongruous taxidermy on the wall.

“I think he’s in league with the fox,” Marylou says. “I think they’re both tracking us.”

“But we pay cash so the fox couldn’t track us,” I say.

“Yes,” Marylou replies. “We pay cash so the fox needs reinforcements to follow us. Like a league of stuffed shadows. Taxidermy ring-wraiths.”

The jukebox in the bar plays U2. ALL THAT YOU CAN’T LEAVE BEHIND.

“Before he was stuffed,” I remark.

The bartender delivers our martinis. I take a sip and suddenly hear early Eno electronica in my head.

Is it coming from Brian Eno on the wall?

I’m being charmed like a snake from a basket by an Indian piper.

I want to surrender. I want to give up the fight. Give up the search. Dissolve into wall and become one with the ethereal piano wafting over me like hallucinatory mist.

Can we ever outrun them now?

Can we ever escape?