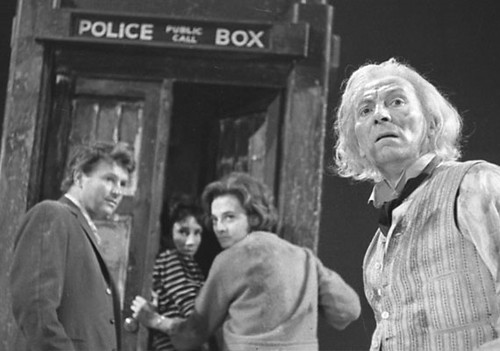 I can’t help it. I still check phone-booths and wardrobes to make sure they’re empty.

Blame PBS and the BBC.

And then chaos ensues.

Wonderful chaos ensued late on a Saturday night that summer and galvanized a fragile, eleven-year-old mind.

I sat riveted as our local PBS station ran another woefully under-budgeted (but joyously imaginative) episode of British import “Doctor Who.”

The Doctor was facing off against the Eternals, beings who exist outside of the universe as we know it, who had brokered a deal with the gods to acquire ultimate enlightenment.

But they had to win a race.

And, even though they had the capacity to create matter out of nothing and effortlessly read minds (as well as countless other super powers I’m sure my adult mind simply cannot recall) they lacked the imagination and the humanity to give their lives purpose. Consequently, they had to pierce through into this universe and utilize the Ephemerals – human beings – to supply what they lacked.

Holy shit. Could I be an ephemeral? 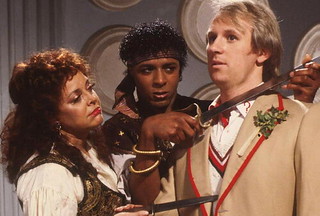 For the uninitiated, “Doctor Who” was (at least when I was a kid, long before the show’s renaissance) a curious little show the BBC had created as a Saturday teatime program for children in the early sixties. The concept of the series was – in many respects – ridiculously simple. The viewer followed the exploits of a seemingly ageless time wanderer – known only as the Doctor – and his various traveling companions as they bounced from adventure to adventure – hurtling through time and space in a ship disguised as an English phone booth.

The idea was thoroughly daft (as the English might say with droll accents). So daft, in fact, that the show ran successfully for twenty-six years and became an institution for millions of British children.

An institution that I, sitting on my state-side sofa, was thousands of miles away from (and mostly oblivious to). But no matter . It was as tantamount to my late-night summer TV viewing as “The Outer Limits” reruns on channel 21 or Rod Serling’s “Night Gallery” on channel 11 (I had already exhausted the “Twilight Zone” cannon on channel 4.)

Saturday nights at 10 pm. Each week’s adventure was introduced by the show’s iconic title credits. The opening sting of the theme music would spill out from the living-room television’s tiny analogue speakers as the low-fi space/time vortex would explode from our modest fifteen-inch screen. No matter. It was the highlight of this eleven-year-old’s television-watching week.

The show seemed limitless. Disguised in something as benign as an old English police call-box, the Doctor’s vast machine (akin to C.S. Lewis’ wardrobe in the Narnia books, the ship is actually bigger on the inside than on the outside) could carry him and his companions to any point in time and space. The narrative possibilities were enormous. One week, I’d be swept into an age-old Aztec civilization. The next week would find me lurking at the last planet in the known universe. The week after would have me in the midst of a Conan-Doyle inspired murder mystery. It was as if this strange, alien character was running amok through countless, time-worn genres – the space opera, the detective novel, the historical adventure, and recklessly breathing a thrilling new energy into each of them.

Imagine opening “KIDNAPPED” by R.L. Stevenson and finding a strange, unfamiliar figure aiding our beloved David Balfour. Imagine scanning a series of Egyptian hieroglyphics and finding an anachronistically dressed group of Londoners etched into the rock adjacent to a rendering of the ancient pharaohs. This was the continual charm of this show. Rounding a corner, you could find yourself face-to-face with the Doctor and his strange little ship. Moments later you could be a part of something as timeless as the Great Fire of London – in the year 1666.

It was an intoxicating idea for a pre-adolescent coming to terms with his parents’ divorce and his sister’s ill health. The idea that we weren’t locked in time and place. The idea that we could leap out of the life we were fixed into and forge new existences – unfettered by physical or temporal laws we had just taken for granted.

It was a mythology that was more accessible than the grander mythos of “Star Wars” or “Star Trek.” I would never live in the 23rd century and had no idea where to find a galaxy far, far away. But, in order to find myself in any of the Doctor’s grand excursions, all I needed to do was find the right corner to turn around.

The show went off the air in 1989 – just in time for my adolescence. Now, as I moved into my junior high and high-school years, daydreams of time-travel and space-faring were replaced by fantasies of girls, cars, homecoming dances, and girls. Saturday nights became adventures of illicit keg-parties, awkward movie dates, and THC experimentation. I took up bass guitar, joined the high-school’s jazz band, and became far cooler than I ever deserved to be. I started playing in rock bands and experimenting with a far wider range of mind-altering chemicals. I now had a new set of Saturday night adventures. Gigs. Parties. More awkward dates with girls.

Over time, that strange, enigmatic figure called the Doctor became a nostalgic part of my youth – no more-or-less important than any other curio one would find in a fan boy’s dusty collection.

In the Spring on 2005, I was alerted by an internet news piece to the imminent return of a new, special effects-laden reinvention of “Doctor Who” by way of Russell T Davies at the BBC Wales. It was like hearing an old friend from childhood was moving back into town, all grown up.

Months later, I think I bought the single last tube television ever made at the local P.C. Richards in Queens (having just relocated back to New York City…recently selling off all possessions) to watch the universe explode again that Saturday night. This new show’s adventure – the first new adventure I had been on in 15 years – featured the good Doctor facing off against time-monsters created by a paradox brought about following his new companion’s interference with fixed events when she saves her father’s life – a father who was supposed to have died in her childhood.

The colors were brighter, the budget far less woeful, the monsters scarier.

And yet the thing that had most altered was the viewer. I was now watching the show as an adult. I was now watching the show as someone who had left their childhood , rounded a corner, and found their own adventure. The stories now resonated with me for myriad different reasons. Now, stories of distant lands and distant times didn’t beckon to me because I didn’t wanted to escape to them. Now, the stories resonated with me because they lent new perspective on a world I had grown rather fond of – even as it had grown more and more complicated. Now, I looked at time travel stories as meditations on consequence. Even if we could change the course of events – did that mean we wanted to? Did that mean we should?

During our first read-thru of newly refinished BOUNDED IN A NUTSHELL this last Sunday, I thought back to the kid who had watched so many of those Doctor Who episodes, hoping he would someday round a corner and find that old, blue phone-booth standing in front of him. Ready to get take him away from his mess of a life. Take him somewhere new. Take him somewhere safe.

But, as I looked around at the group of people reading my words with the NYC skyline behind us, the Autumn sun setting, I realized two things:

There was never safety. Even if that strange box had shown up. The dangers were just different. There were monsters in real life. There was plenty of peril everywhere. In the years since, I’ve lost friends to accidents and violence. Illness and despair. People have had their lives taken and have taken their lives. Danger is everywhere. A mysterious box doesn’t hold any of that back.

The second thing is that I – in some often strange and very unexpected ways – had orchestrated my own adventures. I had built my own mysterious box that could go anywhere in space and time. I had escaped on my own. I had become my own Doctor and my own companion.

But I still ask myself sometimes:

Do the Eternals still need me to make sense of their immortal lives filled with infinite power – and limited imagination.

Does every writer – in one way or another – ask that question?”