One of my first cinematic memories is Yoda. And a box of whoppers. (The whoppers aren’t important. I’m just giving the story color.) My mom took me out of school early that Friday and we went to go see THE EMPIRE STRIKES BACK on opening day. Clear as a memory from yesterday, I remember Yoda chastising his young Padawan Luke Skywalker as the young student balked at the small Jedi-master’s request that he should be able to lift his sunken X-Wing Fighter from the murky bog of Dagobah using THE FORCE (aah…the “Force”…that crazy, quasi-eastern, somewhat hippie-ish religiosity that the saga was built around; I couldn’t move a damn thing with the mind when I got home that afternoon in the summer of 1980. Not. A. Damn. Thing.).

The classic scene plays as follows:

LUKE: Master, moving stones around is one thing, but this is totally different.

YODA: No! No different. Only different in your mind. You must unlearn what you have learned.

LUKE: Alright. I’ll give it a try…

At least if you “do” and fail, you take the feedback and then “do” something else.

It was my first session of personal development.

Many (many) years later, I sat at my writing desk in a fit of (mostly self-indulgent) despair wanting to get the words clattering around in my Smith Corona typewriter JUST RIGHT. Please, gods above on high, take the nausea of self-doubt and self-loathing away and give me the “just right” words to peck down on the page. I will give my first-born and all revenue from my next publishing deal. Just give me the “just right” things to say.

Nothing! Not a Goddamn thing from the gods on high. Those coy little fuckers.

So, in the absence of the gods, I turned once again to the wisdom of Yoda.

Stay with me. I’ll explain. 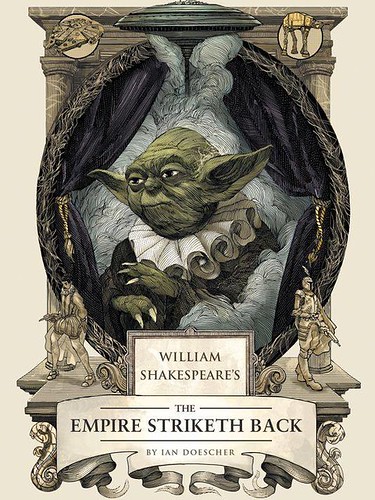 My girlfriend Kirsten (proprietor of a literary agency, lawyer, general Samurai warrior and bad-ass) had recently sold a trilogy of books that re-fashioned the original STAR WARS as Shakespearean plays (the clever work of Ian Doescher and published by Quirk Books). The first book in the trilogy (VERILY, A NEW HOPE) had dropped a few months previously and her staff were working on the last touches for the follow-up (THE EMPIRE STRIKETH BACK).

Kirsten’s staff of agents, aware of my love for this movie AND PARTICULARLY my love of the above mentioned wisdom from Yoda (“Do! Or Do Not! There is no try!”) photo-copied the page from their preview galley that included Ian’s Shakespearean rewrite of that scene between Yoda and Luke and gave it to me as a talisman. A token. A thing to keep at my desk as I banged away at my writing at 5:00 AM (yes, I keep farmer’s hours these days; writing first thing in the morning before the sun comes out…along with the fear and doubt and self-loathing).

The scene may be written in Shakespearean verse, but the intent is still the same:

LUKE: In troth, I understand, and I shall try.

The message is the same. Take action and learn from the results or half-ass it and believe you won’t learn anything.

Kirsten and her staff had high-lighted the passage from Yoda for me. 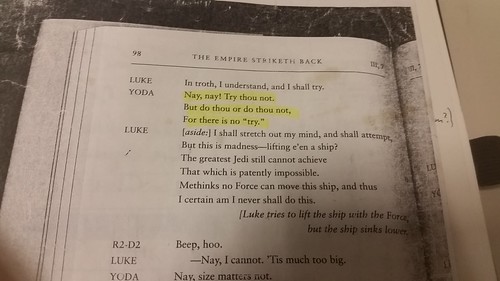 I kept that high-lighted piece of paper at my desk for weeks as I continued to bang my head against the typewriter (usually metaphorically, once or twice physically) until it became like a Turkish “Evil-Eye” staring at me warding off wickedness.

And there I was one morning, barking at the gods of high to give me the “just right” things to say.

The piece of paper with Yoda’s high-lighted phrase staring at me. 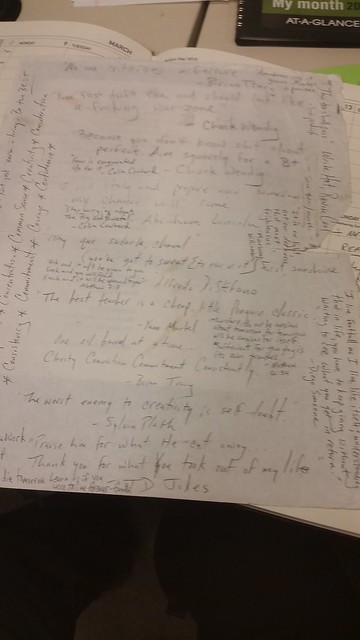 I took the piece of paper and turned it over. I grabbed a pen and started scribbling down one of the few passages from the Book of Matthew I could mostly remember by heart:

“Ask and it shall be given to you.
Seek and you will find.
Knock and it will be opened to you.”
– Matthew 7:7

I became a man possessed. Breaking a pattern. Fighting the anxiety. Working my ass off to get the X-Wing out of the fucking bog. Hell! I realized that I WAS the X-Wing stuck in the bog. I became a student in the middle of a PERSONAL DEVELOPMENT CRASH COURSE. I wrote dozens of other quotes and passages that I could pull from memory on the back of that sheet of high-lighted paper. As if to give Yoda’s words even more power.

“The worst enemy to creativity is self-doubt.”
– Sylvia Plath

“I live football as I live life itself: understanding that in life, you have  to keep giving without waiting to see what you get in return.”
– Diego Simeone

“I will study and prepare and someday my chance will come.”
– Abraham Lincoln

“You’ve got to sweat to earn it first, sunshine.”
– Alfredo Di Stefano

I started tearing through old books on my shelves and pulling quotes from there as well.

“It is our light, not our darkness, that most frightens us.”
– Marrianne Williamson

“Your first draft can and should look like a fucking war zone…
Because you don’t know shit about perfect. Aim squarely for a B+.”
– Chuck Wendig

“This too shall pass.”
– Sufi Proverb

“No one criticizes a failure.”
– Brian Tracy

“Fear is exaggerated! Go for it!”
– Colin Cowherd

“Therefore, do not be anxious about tomorrow,
for tomorrow will be anxious for itself.
Sufficient for the day is its own trouble.”
– Matthew 7:7

And then I turned the piece of paper back over and looked at Yoda’s high-lighted passage on the front. All the writing I had done on the other side of the page made the quote stand out on the paper in a way it hadn’t before. Now that piece of paper wasn’t just a good-luck token.

It was a MANIFESTO!!!

It was my mission statement of belief. It was my personal Constitution.

I put the paper down on my desk and started writing again in earnest.

And the gods finally answered the call.

I finally thought of the “just right” words that morning.

I keep that piece of paper with Yoda’s words of wisdom in my bag and carry it with me around the city. These days, I so rarely look at it. But I know it’s there. It’s a contract I made with myself.