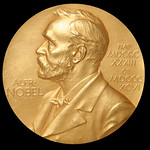 Some played the guitar (classic). I played the upright bass and sang (unorthodox and very unwieldy). Music was storytelling for me before I discovered theater or literature or film or painting. I often raided my parents’ vinyl collection looking for the great truths of the universe before I started searching other media.

When I started working on NUTSHELL in earnest, music was a HUGE facet of the script. I was writing about childhood and kept thinking about those stacks and stacks of vinyl records. The smell. The sound. What would happen if that world met the cold sterility of an IBM lab. But, of course, those worlds would meet. Science and music. So much in sub-atomic science is music. Written math that translates into the physical, beautiful universe. Like music. Written patterns that an instrument turns into melody. Scientists toiling away to discover the written sheet music of time and space.

A man or a woman alone with an idea and little else. Keep looking. Keep at the equation.

We all channel Dylan on a street corner.

Dylan was lone confessor with his guitar and inelegant voice rambling through his poetry of long vowels and oddly shaped words and variable melodies. And, in honor of his Nobel Prize win for Literature, I’ve spent the morning listening to cuts from two of my touchstone Dylan albums: 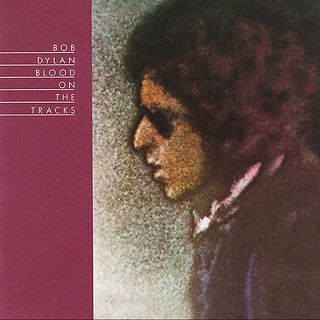 As the title suggests, BLOOD ON THE TRACKS (Dylan at this point a decade removed from going electric with HIGHWAY 61 REVISITED) is a howl in the night from the junction where two lines meet and our protagonist with a guitar and a harmonica must decide where to go. Follow the “Idiot Wind” or “Buckets of Rain.” Seek “Shelter From the Storm” or a “Simple Twist of Faith.”

This is an album best listened to all the way through with a glass of bourbon whiskey neat followed by a Michelob Lager (if you can find it…BUT DO NOT DO MICHELOB ULTRA!!! AT ALL!!! EVER!!! I WILL NOT ARGUE YOU ON THIS POINT!!!)

If no Michelob Lager is available, go with a good mid-American micro-brew.

Because this is an album you cross the American landscape with while nursing a broken heart.

My first exposure to Dylan when I was a young teen was the live video of “Tangled Up in Blue” (posted below) which opens the album. Perhaps one of the best examinations of mid-life disillusionment in song-form. 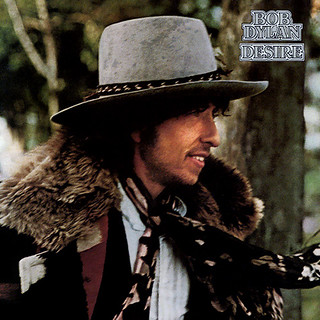 My black-sheep, music-hipster pick for best Dylan album is probably his 1976 release DESIRE. Colored with haunting background vocals by Emmylou Harris and Scarlet Rivera’s seductive violin, this is an album to cross the country in while wearing your Tony Lama’s and drinking your bourbon whiskey straight from the bottle and then chasing it with swigs from a can of Budweiser.

“Hurricane,” his earnest, but surprisingly catchy plea for justice (wrongfully convicted middleweight Rubin “Hurricane” Carter, one of the most watchable boxers of the 20th Century) opens the album with a call to arms. Further down the dusty road is “One More Cup of Coffee” with Harris’ sensitive counterpart to Dylan’s sinewy bari-tenor. This is the song you imagine cowboys singing right before they descend into Country/Western Hades, slipping a bit of chewing tobacco to the boatmen on the River Styx.

Dylan on this album gives one of his best vocal performances, pleading to the sky like a man lost without a trail to follow, his faithful steed dead on the side of rocky ledge, serving up lyrical gold like he’s poet laureate for the shit-kicker.

So, crack open a bottle of Elijah Craig, a can of Budweiser (not Lite, DAMNIT!!!) and raise a toast to Dylan for all the beautiful, wondrous, and strangely garbled lyrics he has treated us to for the last six decades.