I’ve known this moment was coming since 1989 when my uncle Chuck and I watched technological/psychological thriller PULSE. 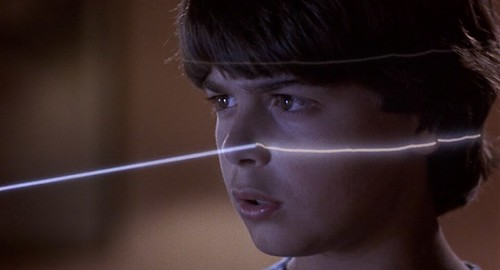 ‘Cyber attack: hackers ‘weaponised’ everyday devices with malware to mount assault!’ was the headline that greeted me as I opened up the Guardian’s “Tech” Section. And it sounded like something from an 80’s thriller. Inanimate objects weaponized! I immediately thought of the movie PULSE which was released theatrically in 1988 (which I finally watched with my uncle on VHS – remember that little curio? – the following summer). Fantastic hidden gem from the late 80’s (and, yes, that IS baby Joey Lawrence) dealing with a strange force that takes over household appliances. What must have sounded like the sequel to HARDWARE WARS in a pitch meeting is actually a taut little screamer helmed by director Paul Golding (who has a resume that is, surprisingly, tiny).

There a couple of scares in this film that had me out of the sofa.

But he was gripped just as tightly during the sink disposal scene.

Once again, there’s an innate fear that our technology will turn on us. We as a species are still only a few thousand years removed from the cave.

Will the technology we build somehow surpass us?

Will we light a fire we can’t put out?

For tips on how to combat the ever-growing Internet of Things, read Marc Goodman’s FUTURE CRIMES.

A little from Marc Goodman and Larry King below (audio/visual sync may be a little wonky until about 0:45).