The republic is a dream.
Nothing happens unless first a dream.
– Carl Sandburg 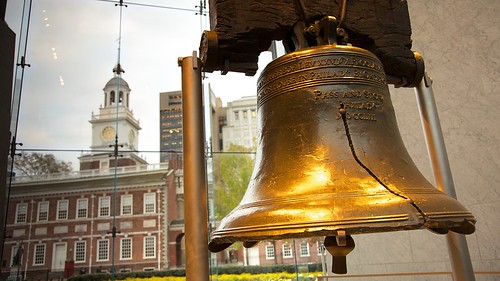 On a bitterly cold morning in January, 2011, I made my first ever trip to Philadelphia. Just a day-trip to see the sights.

And while the art aficionado in me wanted to make a stop by the famed Philadelphia Museum of Art and the boxing fan in me wanted to wander the South Side of town and see the streets featured in the film ROCKY, the first place I went was the Liberty Bell Center to see the iconic ringer.

I found myself close enough to the Liberty Bell to actually touch it. It’s not displayed high in the air affixed to the rafters of the building. It’s not behind glass. It’s in the middle of a room with modest railing around it and a guard standing off to the side. The guard watching the bell is the only thing preventing you from touching this little piece of early Americana (of course, the rascally son-of-bitch in me wanted to touch the bell even more the moment I realized I wasn’t supposed to touch it, but the imposing guard was watching me closely with those red, beady eyes).

The bell was cracked upon its first ringing in 1752.

And what is remarkable as you stand next to the bell is that the actual crack is barely visible. It’s like a hairline fracture. It’s a long, thin line you would miss if you weren’t looking for it.

The larger, jagged line that was bored up the side of the bell – the line that is visible from a considerable distance – is what was necessary to repair the crack in the bell.

The crack in the bell is practically invisible.

The repair is an eyesore.

But it had to be done. Else the bell would be lost.

I thought about the crack in the bell all day as I continued my trek through the City of Brotherly Love. I walked through the city that Benjamin Franklin fashioned in the style of Paris. The ghosts of so many early American Framers everywhere. Good. Bad. Ugly. Romanticized and vilified. Men trying to make the best decisions under the circumstances. Some they got right. Some they got wrong (so wrong). Their best decisions still serve us to this day. Their missteps haunt us even now.

It’s a joy and it’s a fucking mess. It’s bliss and it’s agony.

Because it’s freedom and it can elate us and nauseate us.

Waiting for my train back home to New York City that night, I sat in a Philly bar and listened to President Obama give his first State of the Union Address. He spoke about what we got right over the last two years. He spoke about what we needed to work on over the next two years. Sometimes it sounded like nothing had changed at all over the last two years. There was so much hope and promise at the beginning of the campaign. Had anyone changed anything? Had anyone moved the needle?

But it was ultimately about what we wanted and what needed to change.

Of course, it sounded the same as before.

Because it’s still an equation we’re working on.

Because it’s a crack that needs to be repaired.

But we don’t leave the crack there. We fix the crack.

As we finish one of the ugliest election cycles in recent memory, I can’t help but keep thinking of that cracked bell in the heart of Philadelphia. The invisible crack and the ugly fix.

Whichever side of the political fence you sat on during this election, our essential needs all remained the same. Whether we were operating from a place of hope or fear, trust or suspicion, joy or angst, we saw a crack and needed it fixed.

We WANTED it fixed.

And the bitch of the fix?

So, so, so many threw verbal jibes on social media during the election and penned so much ugly rhetoric. Racism. Sexism. Homophobia. Elitism. No side was immune. It felt like the worst kind of tribalism. Me vs. You. Us vs. Them. My rights vs. Yours. My party vs. yours. The need to be right vs. the need to be true.

All of us falling back into encampment mentality developed over thousands of years living as vagabonds wandering the wilderness. It’s dark between tents, so hurl fire across the way at the other camps so you can see and be seen. And scream so you can hear and be heard.

But things the Republic got right? No tanks rolled out into the town square as power was passed from one administration to another this morning. There was no government sanctioned thought-police. There was elation for some, disappointment for others, but the trains kept running this morning and the sun came up over the east coast.

The nation is still here. Because it’s not easily broken.

But a bell still capable of ringing.

And the best of us – and the best parts of us – still want to fix the crack.

But the fix is ugly. It always has been.

These are the things this nation that I love (and am sometimes bemused and bewildered by) got so right. The best of us want to fix the crack. The crack we can’t even see. The crack we may have to find an ugly fix for. We’re going to have to bore a line up the side of the bell to keep the fucking thing ringing.

We keep the fucking thing ringing.

Just don’t touch the bell at the Center in Philadelphia. Because the surly and imposing guards with the red, beady eyes will kick you out. Or swallow you whole.

And don’t say I didn’t warn you.