Listen to the below playlist and enjoy our little ode to LEONARD COHEN. 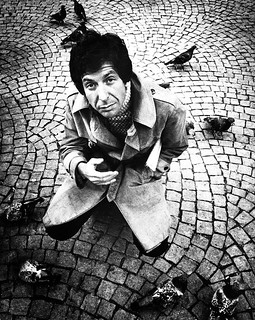 I often heard him called the Canadian Dylan. But that always seemed far too simple of a distinction. Leonard Cohen was a poet of a different cloth from Dylan.

Dylan was a storyteller weaving narratives weary on an street corner howling into the night.

Cohen was a quiet confession over a Manhattan Martini. Singing through a coil of smoke from his cigarette. Opening a vein with a razor blade and bleeding from one hand while he slipped the other hand up the thigh of the beautiful, red-clad woman sitting next to him.

His confession was part of his seduction.

But there was also wit. A dark magician having a bit a laugh at us. He would regale us with dark menace and despair, but his tobacco stained laugh would remind us that life was too surreal and strange to be taken too serious.

There was a twinkle in his eye – almost a wink – as he whispered out all of this solemnity.

There’s no way to create a truly comprehensive playlist of Cohen’s career, but enjoy some of his lesser known gems.

And if you want to join me this weekend and raise a Manhattan to the Man From Quebec, stir two jiggers of Maker’s Mark Bourbon and a cap-ful of Martini & Rossi Sweet Vermout in a cocktail shaker and pour into a chilled glass over three Maraschino cherries.

BUT DON’T ADD CHERRY JUICE. Too damn sweet! And Leonard was never sweet.

A toast to you, Mr. Cohen. You nursed me through many a night of heartache.