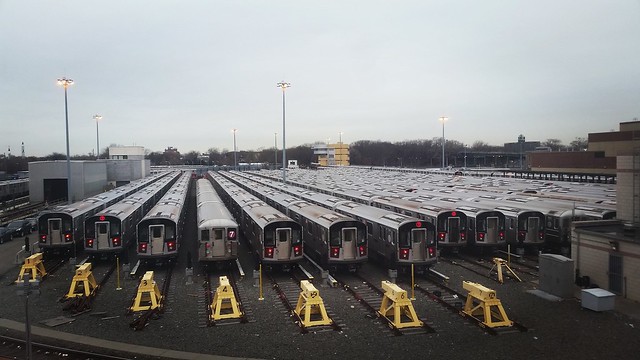 (1) The end of the 7-line across from Flushing Meadows in Queens. I felt compelled to go to the end of the line today. Some distance to walk off the joy-hangover. Day after Christmas. Sanity strewn all over the floor with the leftover tissue paper. And when you live so much of your life on trains, this feels like a stroll to the end of the world. Where trains go to sleep. And dream. What do train cars dream of? Do they dream of journeys they’ve never taken? Do they dream of the same rote tracks they roll over again and again and again and again? Do they long to change tracks? Break free! Go go go go go. Roll onward to new horizons. Like cattle. I want to open their pen and let them roam free. 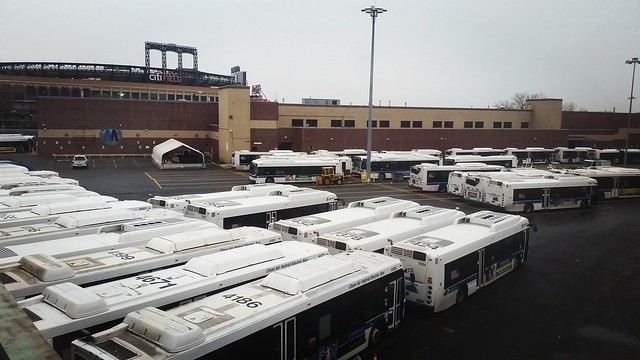 (2) The buses sleep in pens across the bridge. Wonder if they have regrets. They wanted so much more out of their lives. Always under the thumb of their drivers. The demands of their drivers. Never able to choose their own courses. No free will. The liberty we agonize with. Freedom can be a bitch. No one telling us which way to go. Agony of freedom. Left to figure our where and why on our own. 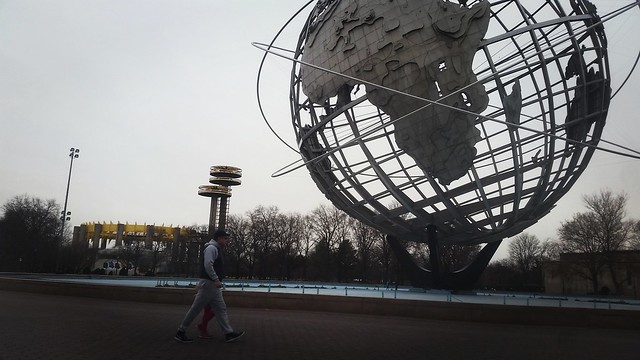 (3) Feeling as if you’re standing at the end of the world while orbiting beneath it. Largest steel globe in the world. Only a handful of people in the park. The 1964 World’s Fair a distant memory. 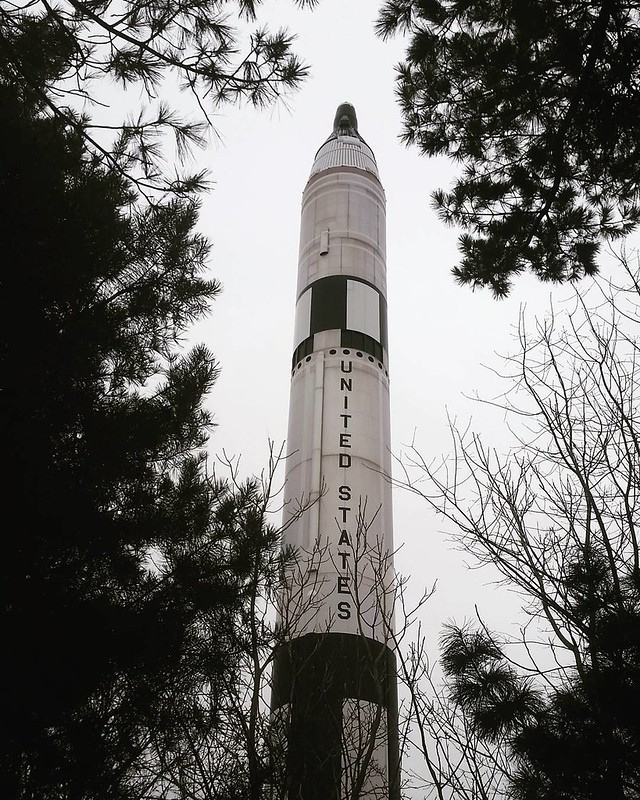 (4) The fear gets me sometimes. What to say? And would anyone listen? Like howling into a vacuum. The sound is gone so fast. I look up and everyone around me is peering into their own cellphones. Pecking away at their own thoughts. No time for anyone else’s. And I thought this morning of John Glenn. The adventurer. I wanted to stand under this rocket today. John Glenn gone from us this year. 95 with his family surrounding him. We should all be so lucky. Seeing the orbit of our world from above. Assured there was more to the Universe than what we can see trapped on the ground. And then I realized – standing under these analogue rockets – that there was more digital technology in the smartphone in my hand taking these photos and writing these thoughts than what was in these rockets when they were shot out of gravity’s hold. 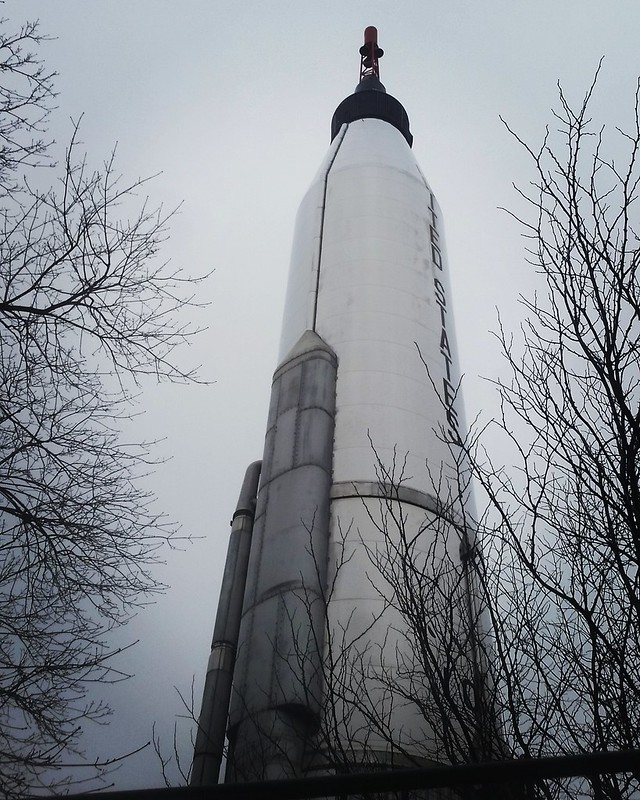 (5) Analogue rockets launching us out of the atmosphere. Asking us to go farther. 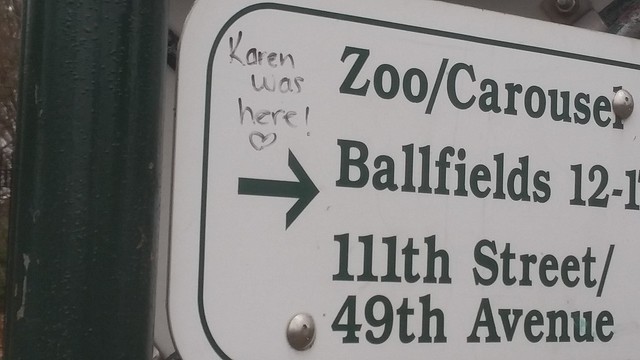 (6) I wonder who Karen is. And I wonder why Karen travels with a felt-tip Sharpie. And then I realize Karen is doing what we all are doing in our own, strange, mixed up ways. We all play variations on this theme. We’re all marking the Universe that we were here. We’re all marking signs as we walk by. Remember us. Keep us in your thoughts. I wonder which way Karen went. To the zoo? Or the ballfields? 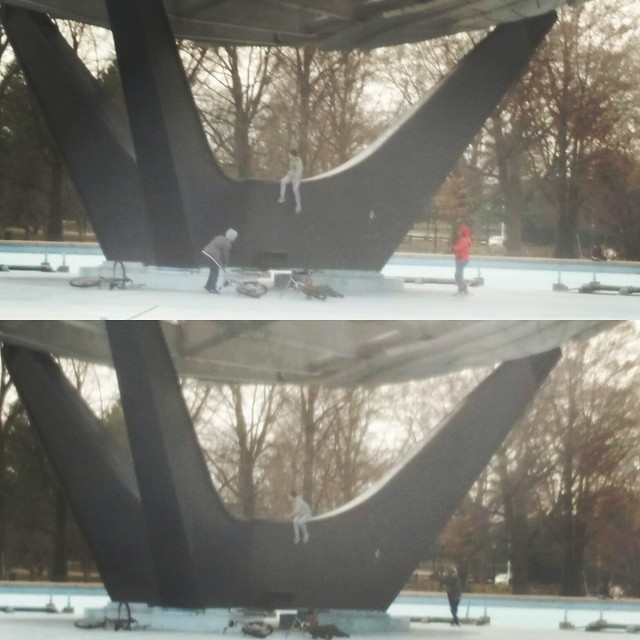 (7) I follow Karen’s arrow, imagining she made her way back over to the Unisphere after marking the sign with her short signature and endearingly girlish heart. Heading for the ballfields. I follow in the footsteps of the elusive Karen with her felt-tip Sharpie. Has she marked her path beyond that sign? Marking her territory at the crossroads. Does she vanish now? Or is there further evidence of her presence in the park.

I see a small cadre of children playing a clandestine game of hide-and-seek below the steel globe. A slight twinge of melancholia watching this, trying to remember the last time I felt that kind of childlike abandon.
And then I hear the short and sharp blurt of a siren… 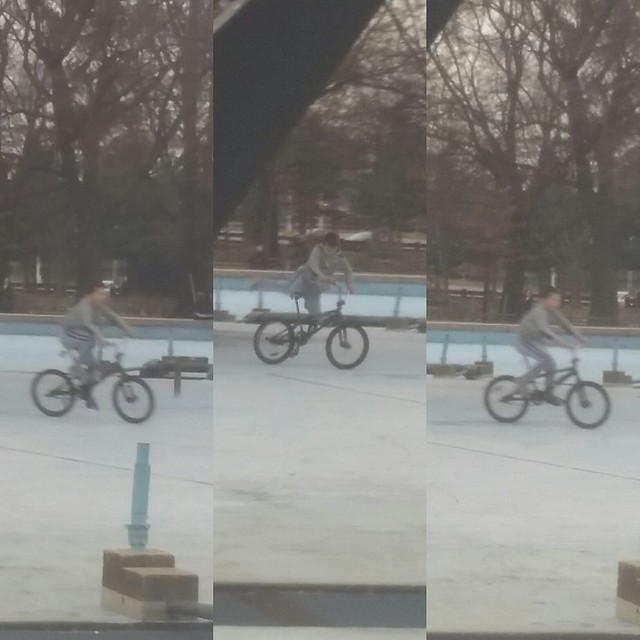 (8) A nearby police car sounds a few blasts of its sirens and a few quick flashes of its lights. Chasing the children away. These subversives cycle away reluctantly. Not wanting to stop their play. Not wanting to be under the thumb of anyone. Lest they become like those trains and buses held lifelessly and hopelessly in their pens. No hope of escape.
Roll roll roll and they’re gone.

But still no sign of Karen’s next mark. Did she continue on to the ballfields? 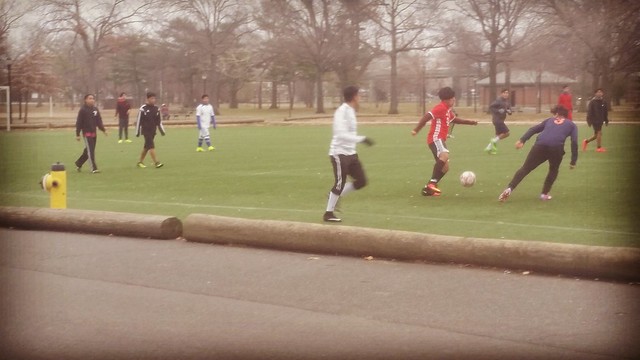 (9) The eternal soccer game. Like the ongoing basketball and handball games on concrete courts. They seem to have no beginning and no end. Just omnipresent games. On and on and on. Played in every season. Every temperature. I’ve seen games played out here in rain and sleet and fog. The ball bouncing off of frozen tundra. Soaked turf pellets kicking up as if from a bog.
The game ends when the sun goes down.

Still no sign of Karen’s next mark. Have I lost her? Did she not head to the ballfields? Did she detour and head to the zoo instead? Do I follow? 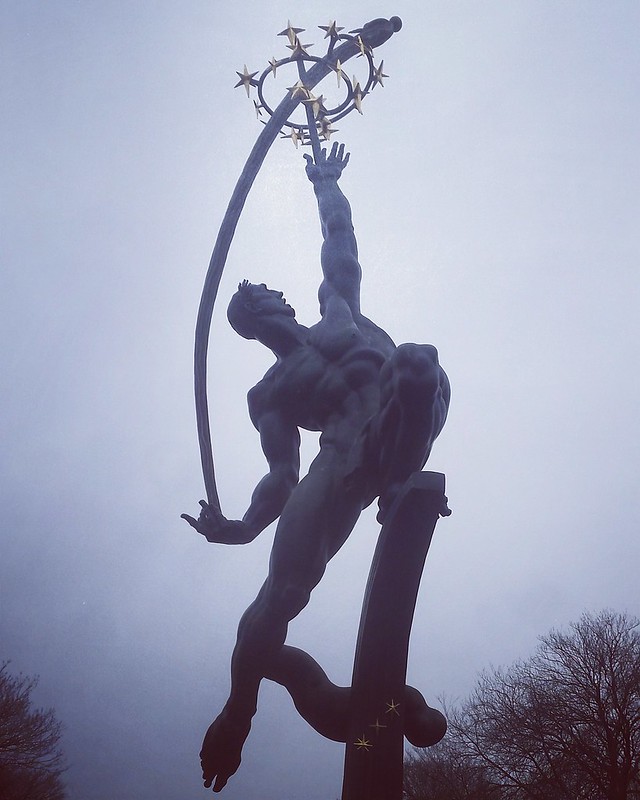 Is she gone?
A small blip on the radar and now she’s gone?
I pass underneath the Rocket Launcher and look at this statue’s powerful arm reaching heavenward. Like the rockets I passed by before, there’s a yearning to escape the ground. Get out of gravity’s reach. Like dreams of flying when we were kids. Flights of fancy are all around us in this park. The Rocket Launcher throws us into space with a cluster of stars for us to go through. The silhouette of the statue is almost like he’s serving a tennis ball before sending it away at breakneck speed with a cosmic racket.

Karen’s next mark is gone.
Where to go now? 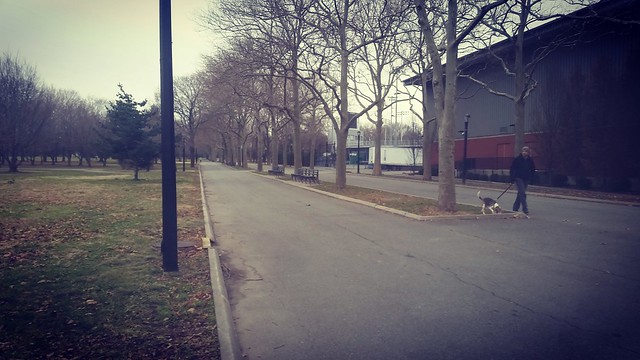 (11) Karen is lost.
The park is desolate.
But there’s something beautiful about finding yourself practically alone in a city that boasts such a huge population. A chance to think about the good and the bad. The gains and the losses. The time that we have and the time that we don’t have anymore.

Did Karen wander off beyond the edge of the world and then decided to just keep going? The crowds were just too much. The hysteria. The angst. The fear. Just too much to take.
Just drift out of orbit and head to a new world. A new star.

Did she take one of the rockets?

Did the Rocket Thrower slingshot her off through the cosmos?

Or was there a sign directing us to a new path?

A new planet just beyond the ballfields.

Away from the zoo.

Did Karen mark that sign?
Maybe not.
Maybe that’s why I missed her. 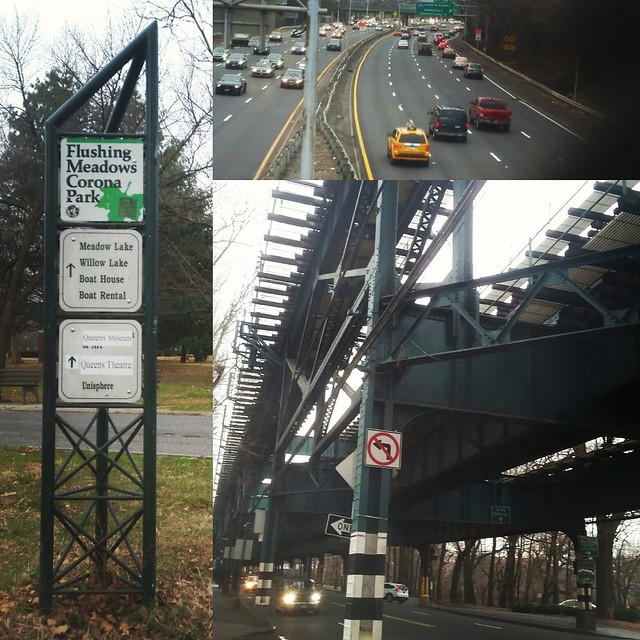 (12) No new paths found. No new planets.
Only the old and familiar signs that lead me back across the highway and under the 7-line.
The long walk back down Roosevelt Avenue. Under the elevated train. The rumble when the train cars go overhead. Like bowels of an engine.

I think of the train cars still sleeping in their pens. All those sleeping buses.

Mark the sign with their girlish hearts and say “We were here!” And then vanish to worlds unknown?

Cars turn on the avenue. Traffic returns and I no longer have the world all to myself.

The long walk back into the village. The millions and millions moving every direction. 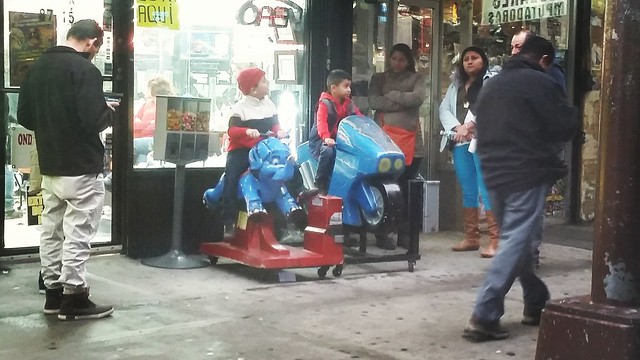 (13) But there is still childlike abandon. Even if it’s the simple joys that can be paid for with loose change in front of corner stores and bodegas. 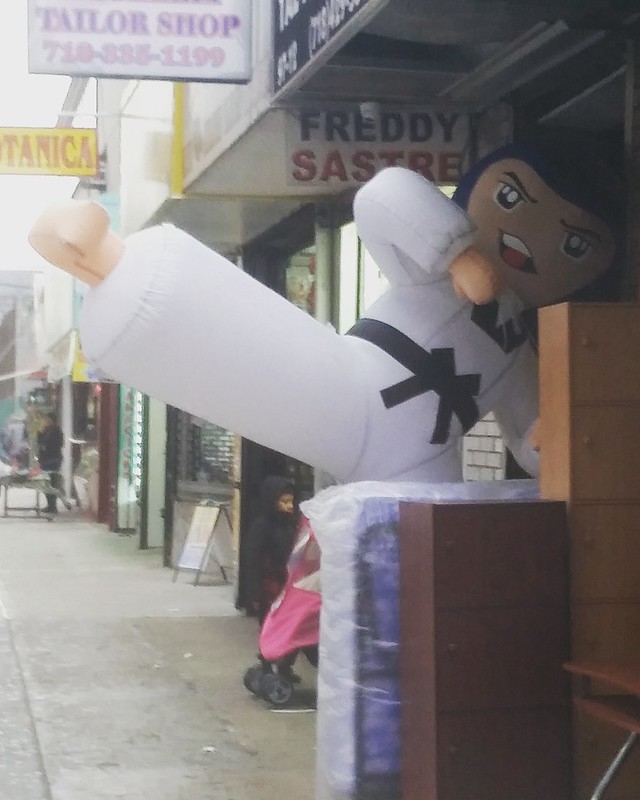 (14) The simple joy of the NYC curio. The strange. The random. The boisterous. The outlandish. The exquisite and exquisitely trashy. 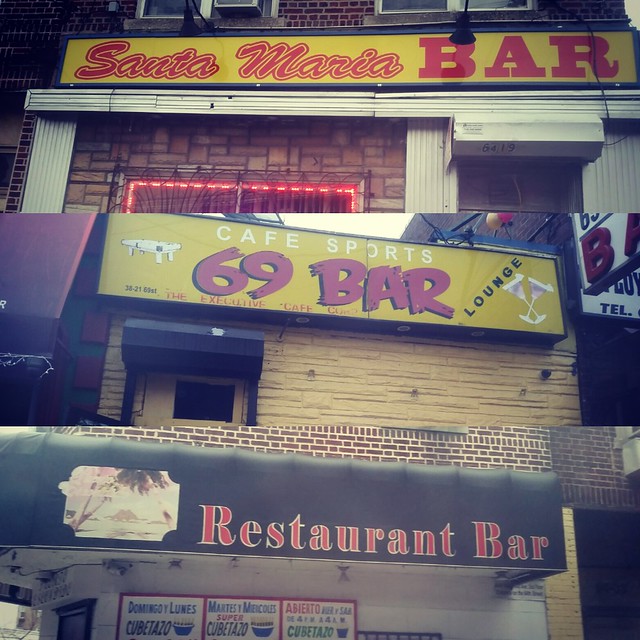 (15) The profane beauty of dive bars and drinking dens that thrive under the elevated train tracks.

Knowing enough Spanish to navigate getting a martini.

And getting the game on the TV. 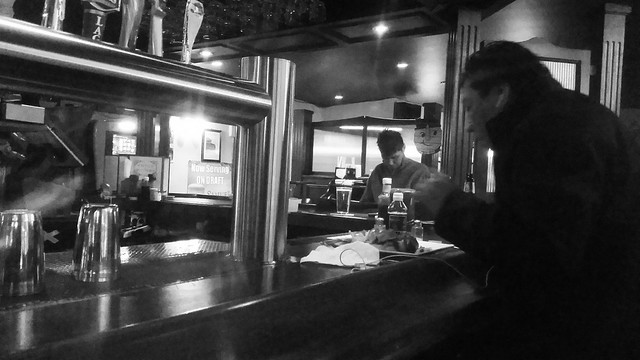 (16) As I wait for a pint of Guinness at one of the local haunts, I take a moment to breathe in the near – empty space. Four or five drinkers surround me. A couple of the figures around me are eating. The others are drinking alone. Hunched over the bar.

Looking into their phones.

Maybe they’re all looking for what the elusive Karen found somewhere in the park.

A new planet outside of our orbit.

Maybe they’ll find something of their own.

This little train of thought is for them. A tale told by an idiot from a handheld device. A frustrated Beat poet with a phone, a few photos, and clustered musings sent into the ether like digital smoke signals.

Maybe someone will see them.

I hope the drinkers around me see it while they gaze into the abyss of the internet.

If I find a new path, I’ll let you know.
I’ll mark it somewhere for you.

Until then, this is me marking the first sign and saying “Jason was here.” With a girlish heart.

I’ll be at the ballfields.