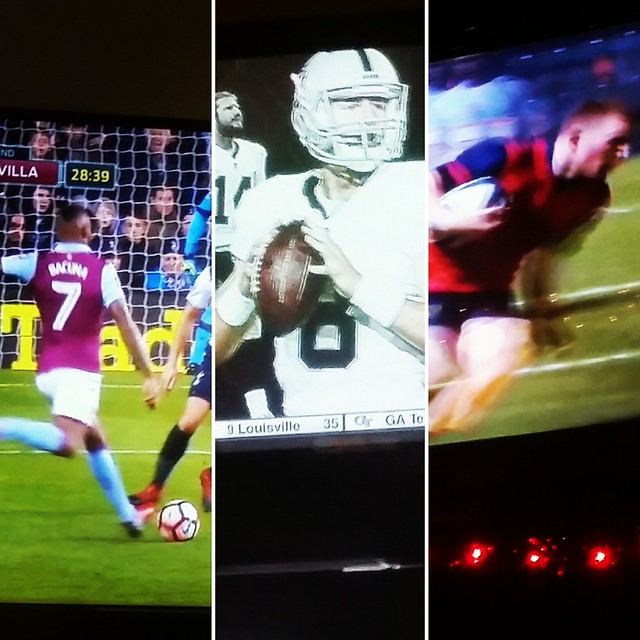 (1) As the snow fell over New York City this past weekend and our local neighborhood grinded to a halt, the good people of our town took full advantage of a free Saturday/Sunday and filed into the pubs and bars throughout our borough so that they could scream colorful and obscenity-laced abuses at walls of televisions broadcasting a series of contests involving batteries of grown men kicking, throwing, and pursuing various shaped balls. Some contests involved balls that were spherical. Some balls have been classified as “prolate spheroid.” Some balls looked very much like oversized eggs. Or very large horse suppositories.
Some balls were kicked forward.

Some balls were thrown forward.

Some balls could only be kicked forward and thrown sideways.

All various codes of that peculiar tribal endeavor called “football.” 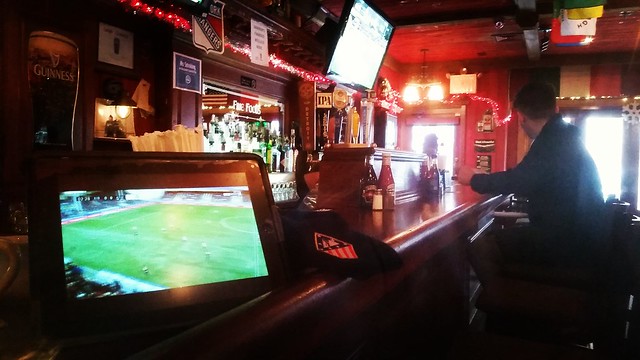 (2) Where else could our adventure begin but over brunch in an Irish bar? Watching English soccer on TV. And Spanish futbol on ye olde iPad (because the local Irish bars never have the espanol channels as part of their package). Waiting for a Southwestern omelette. And beans on toast. Because beans on toast is one of the great English culinary delights. Next to Jammie Dodgers. And Hobnobs. And Jelly Babies. Actually, the English clearly have the magic touch when it comes to junk food.

Needless to say, this morning’s brunch has become quite the international, multi-cultural affair.

It is missing one thing… 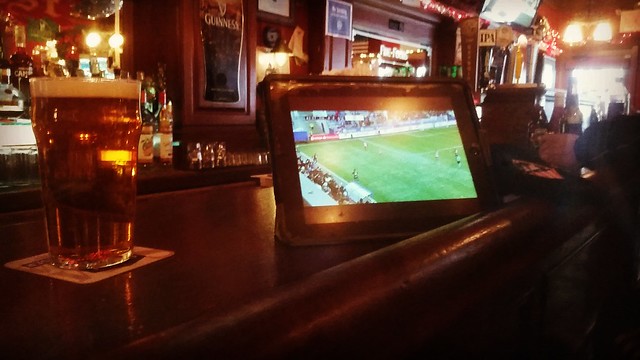 Easily my favorite English affectation when it comes to my soccer viewing. Creamy nectar from the tap. Others can get bent out of shape over “pitch” vs. “field” and “kit” vs. “jersey” and “penalty” vs. “PK.” But I’ll proudly wear my Boddington’s on my sleeve (figuratively…well…sometimes literally…) as my one guilty pleasure when it comes to any latent Anglophile tendencies I may have.

Well, or if a Smiths tune comes on the jukebox. My savage little heart may wish I was a Manchester boy for a moment. If only so I could play guitar like Johnny Marr. 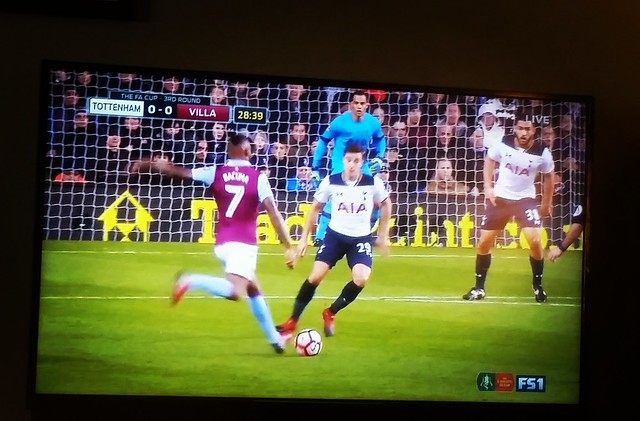 People of privilege would have played sports on horseback.

The working class would have played sports on the ground.

Legend has it that ancient warriors would decapitate their enemies after battle and kick their dismembered heads around for fun.

Likely untrue, but it’s always fun when someone drunkenly drops that bit of trivia at the bar before attempting to kick the snuff out of a rival fan.

However, “folk football” was a serious sport played by a whole town many years ago (before anything was properly codified). The whole town would attempt to take possession of a large ball (or bladder-esque thing) and move it around to pre-destined locations for points. And these “games” could get rowdy. Hooliganism at its most epic and lyrical. 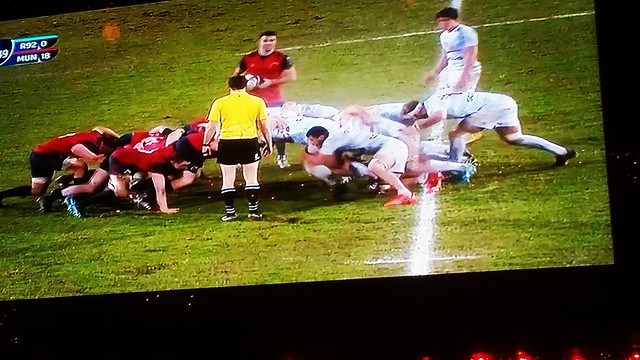 (5) Enter the rugby fans!! A handful of TV’s are changed.

And the bar is suddenly drawn into the exploits of Munster and Racing.

The hulking masculinity of sumo wrestling. 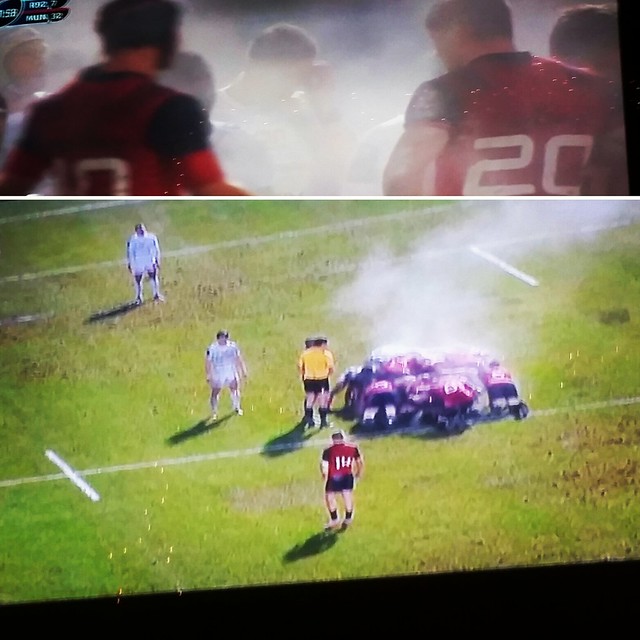 (6) As they sweat and toil in the cold, wet air, steam comes off the scrum.

Even this heterosexual male can appreciate this might be the most thrillingly homoerotic sport ever devised. 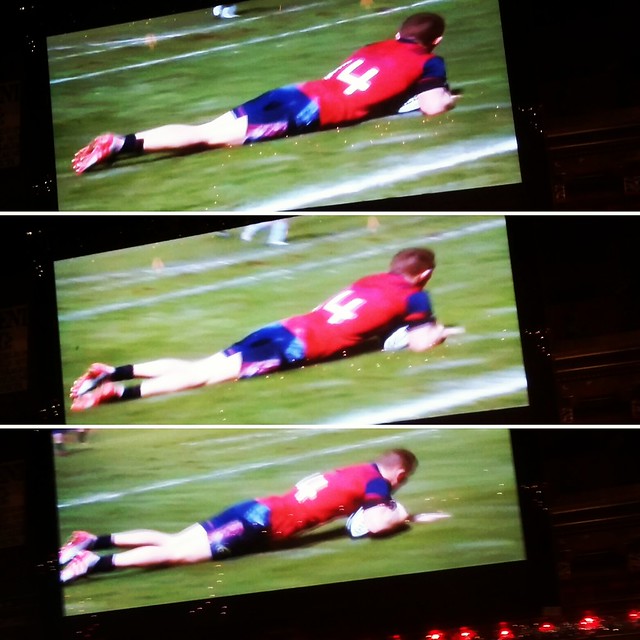 (7) It has always struck me a bit odd that, just after scoring in rugby, signs in the crowd go up and every fan of the scoring team screams “TRY!” After the player in question just DID!!! (“Try” – analogous with “Touchdown” in American and Canadian football – originates from early terminology, as in “try at goal…”) 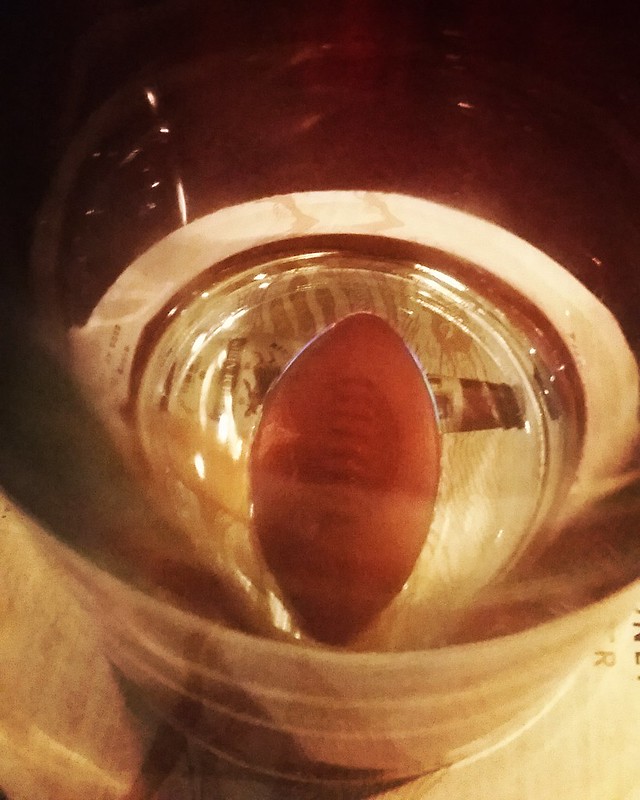 (8) As I finish off my Boddington’s, the bottom of my pint glass alerts me that gridiron football is fast approaching. Soccer and rugby will have to make way for the corn-fed, burly, pound-and-ground madness that is the NFL Playoffs. 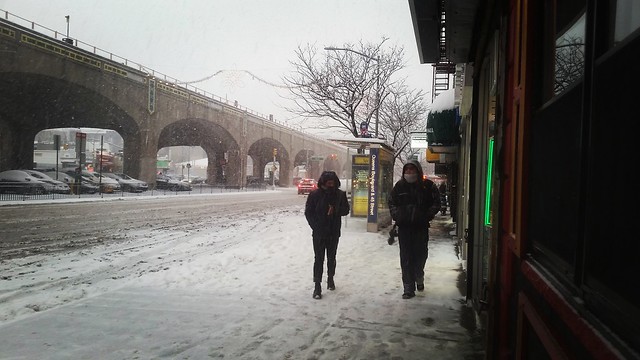 (9) Braving the cold and the snow for another local haunt. 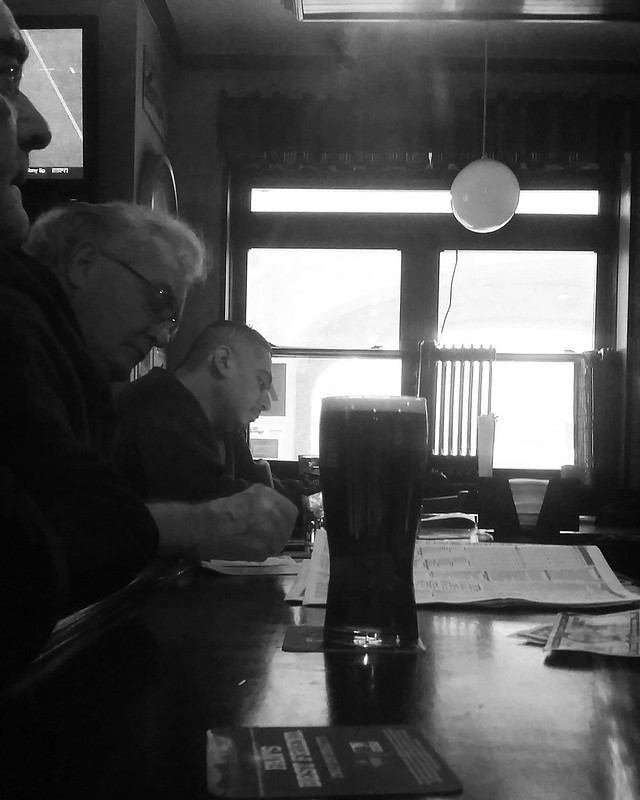 (10) The heat is out in the bar, but the crowd is slowly building for the double-header anyway.

Plans and dreams and schemes. 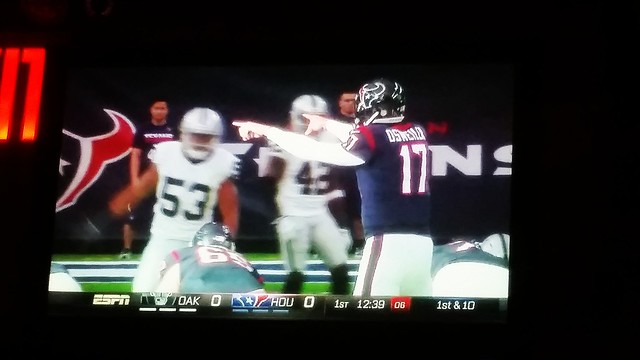 Like codified combat. Soldiers and generals face off.
Agony and ecstacy. 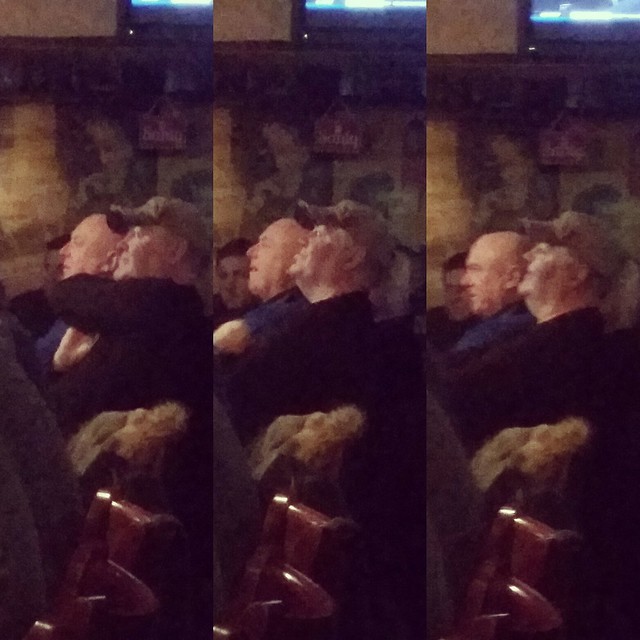 (12) The bar is now packed and they watch from the shadows.
The game’s afoot. 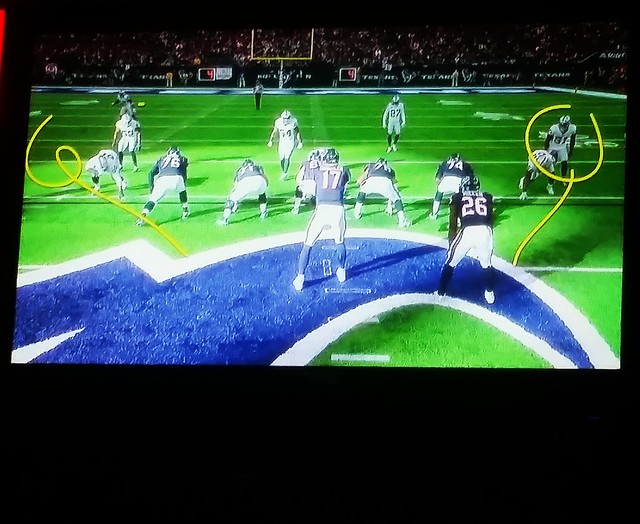 And what went wrong. 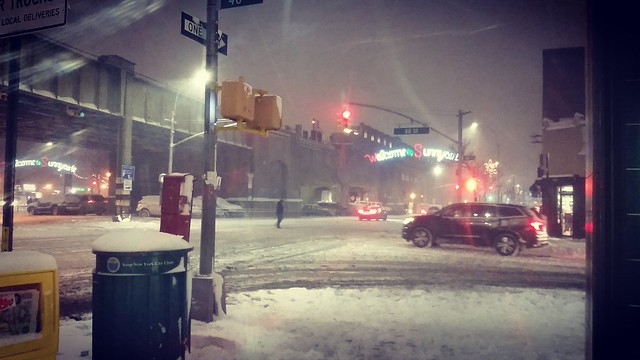 And the snowy aftermath. 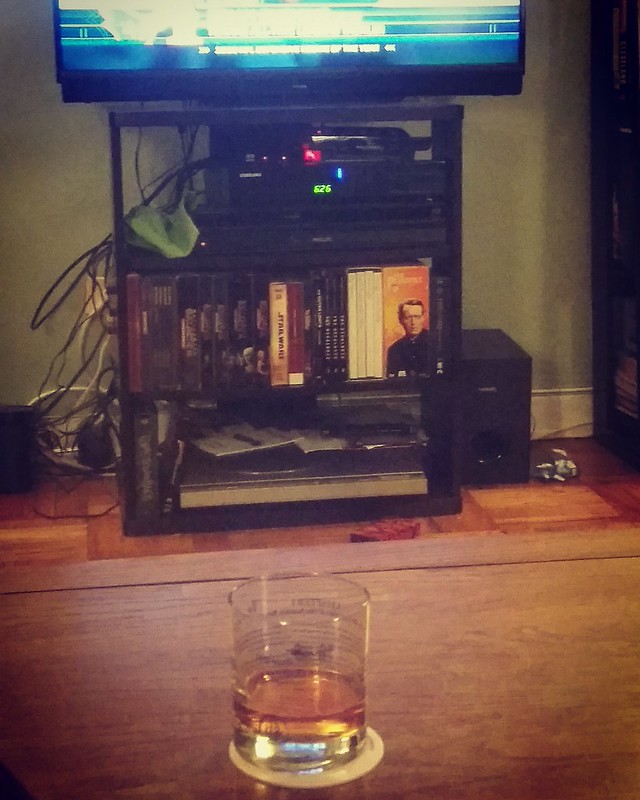 Like a St. Bernard sent out to revive me after a bitter trek through the cold and the snow.

Surviving the avalanche and finally finding myself home and warm.

To finish my day of footballs. 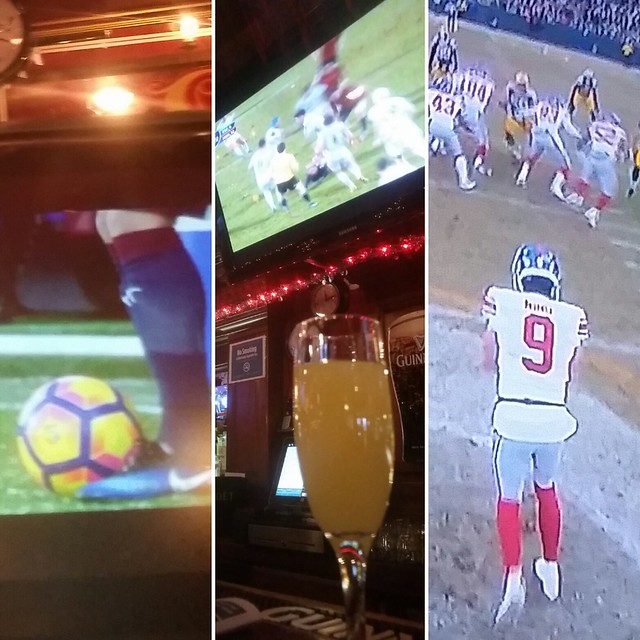 (16) Cheers to a snowy football Saturday!