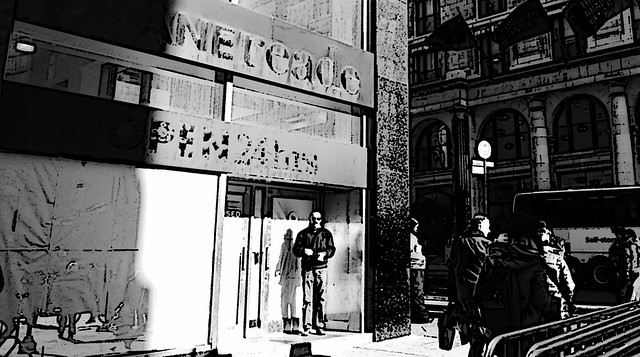 You won’t believe me – you’ll say I’ve gone soft in the head – but I’ve seen the Devil. I’ve seen the Devil. And the Devil seen me. The Devil seen me while standing outside the Duane Reade that just closed down on Fifth Avenue. The place closed down suddenly. No warning. I staggered by yesterday morning and it was just a shell of shuttered windows. And I thought they were closing it down so they could have it done and dusted before the end of the year. Close it down before the Holidays. Before the rush.

But I’m wondering if they – the mysterious ‘they’ – they shut it down because that’s where the Devil comes from.

That’s where the Devil stands.

The mysterious ‘they.’ ‘They’ who open and close everything in this town. ‘They’ who are in control.

Some mornings I’ll take a cup of used coffee. You don’t have anything worse than what I’ve had. I got through stomach cancer. Probably caused by the ulcer I made for myself when I still worked for the Mighty Establishment. The Man. He’s part of the mysterious ‘they.’

I got through two divorces. Those damn things were more painful than any of the chemo.

Wait! You see that? 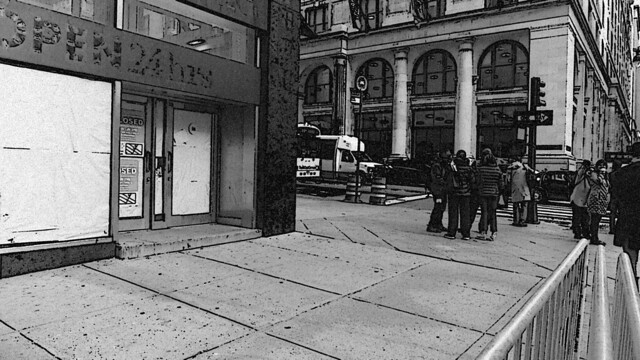 The Devil’s gone! You’ll say I’ve gone soft in the head. Of course you will. But the Devil was right there and now he’s gone.

I swear. I swear on my Bible. The Bible I keep back at my camp on 3rd Avenue. The Bible my mom gave me before she passed. Back when I was in college. Back when the mysterious ‘they’ was teaching me how to work for the Mighty Establishment. Back when I had a tie and new shoes. Back when I was part of the Big Operation. Dreaming of the big house on State Island. The beach house on the Jersey shore. The Porsche 911 Turbo. Black. Got to be black. No other color it could be. If it’s red the cops will be hounding you from here to eternity. You can’t drive anywhere without pigs sniffing around you if you drive red.

I swear on that Bible the Devil was right there and was watching me.

The urban campers have all been whispering they seen him around elsewhere.

They been hearing him in their dreams.

They been seeing his shadow around corners.

He doesn’t stand still long enough to get a good fix on what he looks like. He moves like vapor. He’s there and you feel him. And then he’s gone like cigarette smoke. 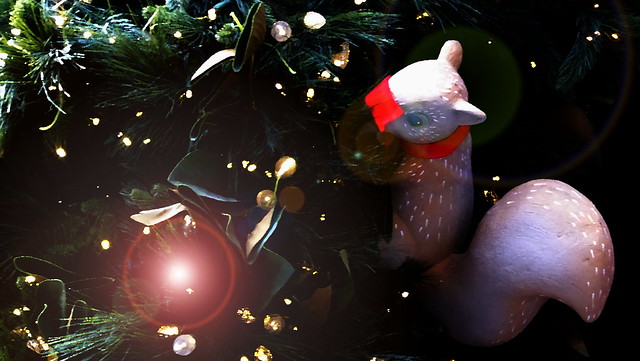 I hear the voices around the corner. They’re coming from uptown – a few blocks up. Like fairies and sprites laughing at you from the forest. Impish laughter. The laughter of mischievous children up to no good on the playground. Terrorizing the small, antisocial child crouching at the corner of the blacktop who can’t handle a game of tether-ball or four-square.

But the squirrel is snickering at me.

I rush up Fifth Avenue and hear the plastic squirrel snicker at me as he stands static on the wall of Lord and Taylor’s – peering out at me from the evergreen display that climbs up the side of the building.

“Tell me.” I’m watching the plastic, static squirrel with the impish laugh like a hawk. Ready to swoop in and devour him. “Tell me.”

The light changes and the laughter stops.

All I can hear now is the rush of the city. The holiday traffic. The shoppers snapping pictures of the window displays. Crowds and crowds around me.

But no snickering from the plastic, static squirrel.

What’s the plan in hand?

You’ll say I’ve gone soft in the head, but I saw the Devil and heard the snickering.

What’s the plan in hand?