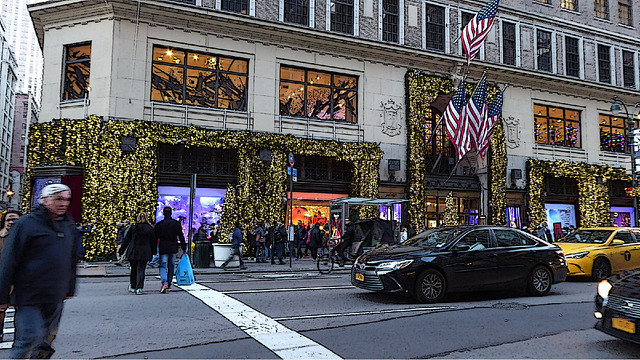 (We rejoin our hero across form the Lord and Taylor building on 5th Avenue.)

There’s a tremor and I feel the ground move under my feet.

Is it the ground?

Is it my legs?

Something’s gone unhinged and is now moving without anchor. The city is like a tessellation of shapes and all the pieces have suddenly unhooked from each other – free floating as the water gets rougher.

And the whispers. A thousand voices hissing at me like a basket full of coiled snakes.

I cross Fifth Avenue to see if there’s terra firma on the other side of the street. I feel like I’m crossing to the other side of a fault line. The ground stills like a calm sea as I pass over the crosswalk and my legs stop shaking.

All praise for solid ground.

I look across the street.

Nobody else feels it.

The crowds are still bustling up and down the avenue. The shoppers are still shopping and the tourists are still snapping pictures with their overpriced phones. People are stopping for selfies in front of the window displays. People are spellbound by the lights and the colors. A mass of people that bottleneck just outside the store’s entrance watching the dazzling Christmas wonders powered by ConEdison.

But nobody else feels the tremor I feel outside the Lord & Taylor building.
Nobody else hears the maddening laughter of the plastic squirrel or the ominous taunts about the ‘plan.’ 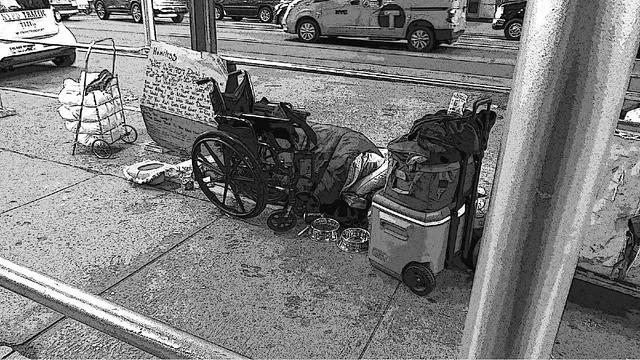 Sydney and Suzie have been gone for days now.

Did the cat know something? Could the cat sense something we couldn’t?

Did the cat hear the hissing and feel the tremor before I did? The way a dog can hear a whistle that blows above human frequency of hearing. The way a cat can see ghosts.

The cats are chasing ghosts. Humans can’t see the ghosts. We couldn’t understand them.

But cats can see them. And cats understand them.

So Tickles the cat knew something we couldn’t know. And Tickles split.

Chasing a ghost, but it wasn’t a friendly ghost.

Did Sydney and Suzie finally hear something too and split? Did they feel the tremor and hear the ominous hissing from the evergreen display crawling up the Lord & Taylor building two blocks down? 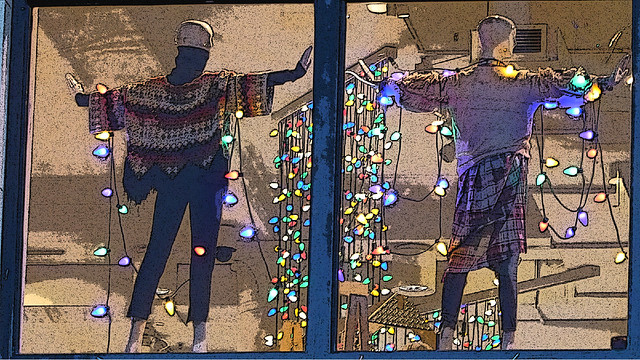 Did they get you?

Sealed you away in the tower and bound you with string-lights.

A fate worse than anything I can think of.

Got to find a way to free you. 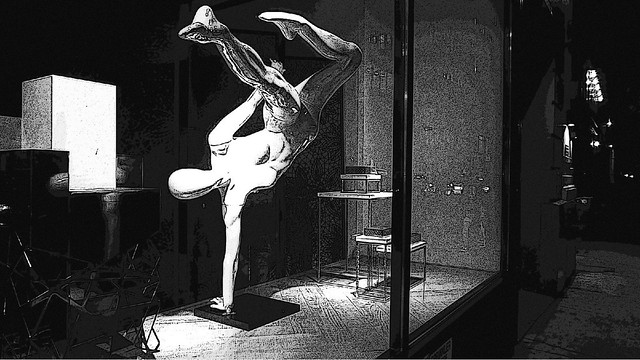 Barry was a dancer before his opiate addiction took him to the streets. Moved here from the panhandle of Oklahoma. ‘Where the wind comes sweeping down the plain.’ That’s what the song says. Barry says it’s true. A lot of wind and a lot of plain in Oklahoma.

Moved here when he was 18. Just out of high school. Got off the Amtrak with nothing more than a suitcase and his smile.

Barry wanted to be a ballet dancer, but all his instructors told him his stance wasn’t good enough. Thought about being a hoofer, but his knees weren’t strong enough. Loved to tap dance. He showed me a few moves when we were panhandling on the corner of 42nd Street and Broadway.

As close to Broadway as he ever got.

“I wanted to be like one of the Nicholas Brothers,” he told me once. “But I ending up doing a lot of modern – land of Martha Graham, man” he told me.

Hell. I don’t know Nicholas Brothers or Martha Graham. It was all economics and sociology and algorithms when I was in college. Talk to me about Keynes and Pascal and Hobbes. Martha Graham could walk by me in the street and I wouldn’t know her from a beat cop.

Damn. They got Barry.

They posed him and plasticized him.

And he can’t make the pain go away.

‘Cause they posed him and plasticized him.

Got a find a way to free you all.