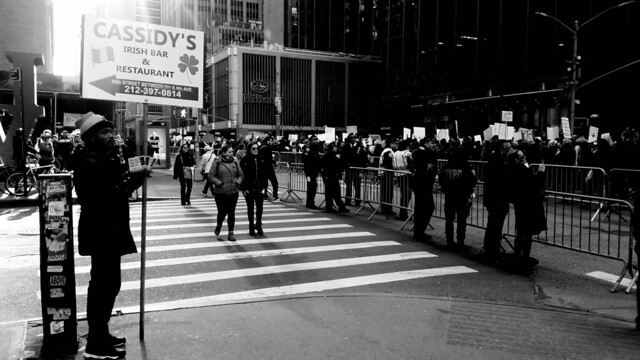 “Well, if that doesn’t just sum up the conundrum facing everybody these days,” Marylou says as she draws a narrow finger out of her coat pocket and points out the guy with the Cassidy’s happy hour sign on the sidewalk as the protest marches down a sunny, barricaded Sixth Avenue. “As far as I see it, friend, we all got three courses of action to question here.”

“What are these questions three, Marylou?” I ask.

“Question one: should we take up a placard and distill belief down to a clever, pithy slogan that we’ll march into the sun with? Our ideological compatriots hand-in-hand with us as we sing songs of social significance.”

“Should we hiss and howl at their earnest political outrage? Our ideological opponents who are clearly as deluded as we’ve become disillusioned. Should we just mock them all? The futility of marching. Why march when you could work, people?”

“Should we forget all this ballyhoo, follow the arrow on the sign to the advertised happy hour, and get twisted?”

“Many truths have been found while twisted, Marylou.”

“You didn’t used to be this cynical, Marylou.”

“I didn’t used to be this divorced,” Marylou says as she puts her hands back in her pocket.

We stand on the sidewalk looking up and down the avenue. 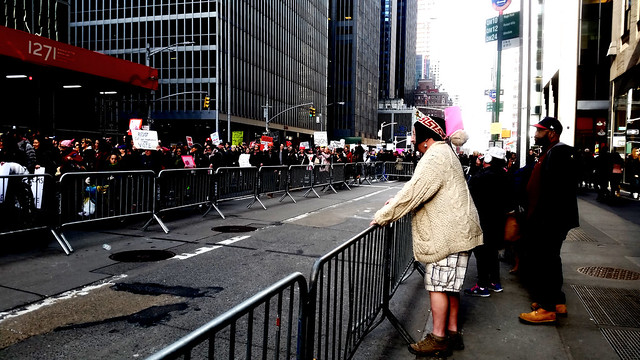 I check the MTA subway status on my cellphone.

“No. Electrical outages on the subway line.”

“Unless we walk the bridge.”

Marylou now lives in Long Island City with roommates ten years her junior. A friend of a friend of a friend knew someone who was looking for an extra roommate after someone dropped out of school and went home to California. Marylou needed a place to stay and found herself finalizing her divorce around the same time her new roommates were finalizing their last college semesters schedules.

The city is a peculiar place.

“You want to stop for a beer special?” I ask.

“Not there. But there was a bar I used to end up at all the time before I met my ex. Back in the days of freedom. When the single life used to tousle my hair like a day at the races. When I would say ‘yes’ to everything.”

Marylou’s eyes shift from the happy hour sign. She glances into the sun for a second, blazing like Apollo’s searchlight, before averting her eyes and looking down the avenue. She watches the march continue on and on and on. So many signs. So many slogans. So many voices. Hope and agony.

What to believe in? What to think? What to say? 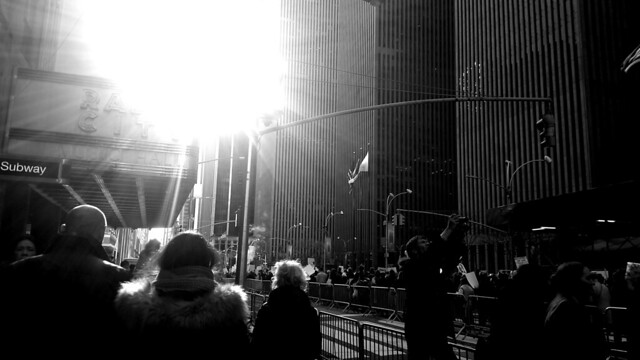 “Yes. Yes. Yes.” Marylou looks back to me and takes my arm. “I want to drink at that bar. The bar I used to drink at when I was free. When I was single. When my life was all about what I could do. Not what I should avoid.”

She drops my arm. “That’s another conundrum. I can’t remember. I always ended up there drunk. I never arrived there sober. I never saw the sign. I just found my place in the corner and felt safe. Felt home. Felt alive. I ended up there at least a dozen times and felt like I was drinking in my own private Shangri-La. That’s what I want, my friend. I want to drink again in my own private Shangri-La.”

“Was it near your old place?”

“Which train was it near?”

“What do you remember?”

“The feeling I had when I would drink in the corner. My own private Shangri-La. The last time I felt truly safe.”

She takes my arm again.

“I need to find that bar,” she says as she watches the march continue down Sixth Avenue.

“Do you realize how many bars there are per capita in this town?”

“Maybe it was uptown. Or the Bronx. Near Yankee Stadium.”

“What the hell were you doing up near Yankee Stadium?”

“My friend Joan used to take me to games all the time.”

She gazes again up the avenue as if she’s staring off into the distance to find Yankee Stadium.

I check the MTA subways on my phone again.

“Still no trains into Queens. But we can do the D-Train uptown.”

She takes my hand and gives it a tug.

“Bronx-bound, friend,” she says as we step back down the stairs into the subway station.

Searching for her private Shangri-La.

Found in the corner of some dimly remembered bar.

(Tune in tomorrow for the next installment….)