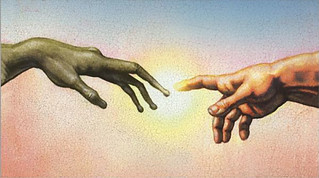 I had the fantastic opportunity of being present for this World Science Festival panel a number of years ago. Particularly interesting were the insights of Brother Guy Consolmagno (PhD. at M.I.T. and Director of the Vatican Observatory) whose book Would You Baptize an Extraterrestrial?: . . . and Other Questions from the Astronomers’ In-box at the Vatican Observatory (with Paul Mueller) was an incredibly involving read. One of the central ideas of the book is that both science and religion are driven by a culture of organization AND by subjective, personal perspective. Scientists are often driven down a very specific path of inquiry based on their subjective hypothesis and working to prove it. Similar to the specific existential problems that various religions are working through and are driven down particular paths based on a culture’s specific needs.

We all pursue something we have faith in.

The idea of evidence really struck me. We all look for evidence. Whether it’s empirical or existential. Is our evidence testable or is it felt in our “soul?”

And does knowledge undermine faith??