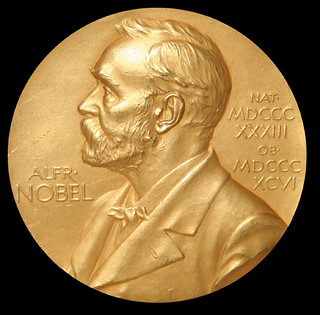 As if to celebrate the 50th anniversary of the great Sixties Sci-Fi classic FANTASTIC VOYAGE, the 2016 Nobel Prize for Chemistry has been awarded to Jean-Pierre Sauvage, Sir Fraser Stoddart and Bernard Feringa “for the design and synthesis of molecular machines – the ‘world’s smallest machines.’”

“Imagine trying to build a lego castle in the dark with boxing gloves and you’ll get the idea of how hard it can be to link up the components to create a molecular machine.” – The Guardian describes the level of difficulty.

…but also because so many of these machines have the potential to self-repair.

“In the future, nanotechnology coatings or additives will even have the potential to allow materials to ‘heal’ when damaged or worn. For example, dispersing nanoparticles throughout a material means that they can migrate to fill in any cracks that appear.” – The Independent explains.

The 2016 Nobel Prize win for Chemistry is another major nod to technology of the tiny.

As with yesterday’s Nobel Prize win for Physics, the science of the infinitesimal is seizing the scientific community’s imagination of late. What can we learn by looking deep inside? There’s certainly a philosophical edge to so much that goes on in these fields. Considering the strangeness of what particles do the smaller they get, it begs “spooky” questions about how reality actually works. What’s going on beneath the hood? On some level, are we not meant to completely understand it, lest we start tinkering too much with it and break down the engine? 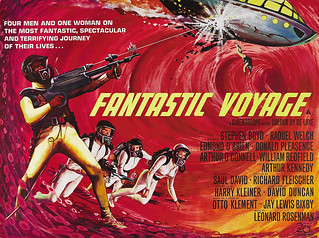 I clearly remember watching FANTASTIC VOYAGE as a kid and getting a bit of the shivers at thinking of things getting so ridiculously small. “Molecular” was a pretty intense concept to begin with. Things so small you could no longer see them. It’s easy enough to reason with in theory. But to internalize something that small? Intense.

And then they found “quarks.”

Well, what made up quarks?

And then it was string theory. But what “twine” makes up the string? 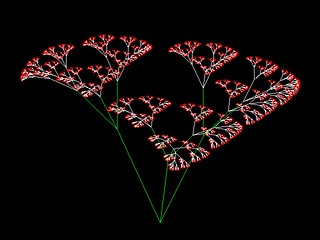 And suddenly the entire room I was sitting in was this gigantic fractal composed of countless atoms, each housing an entire universe of infinite galaxies composed of quarks, strings, and whatever else scientists found made up the seemingly straightforward proton/netron/electron set-up.

Holy shit. Not only was the infinite night-sky outside our apartment on a starry night a total mind-fuck, but the carpet under my feet was host to infinite infinities.

The mind buzzes with wonder in those moments as much as it wants to shut down.

But the study of things that small have resulted in some incredible finds (take a look at this “molecular car” day-tripping over some copper atoms)!

The beauty of the whole thing is that what FANTASTIC VOYAGE does with its B-movie plot (four brave men…and one very brave and very shapely Raquel Welch…are shrunk down to microscopic size and sent into the body of a great scientist to save his life) is what we find ourselves doing with nano-technology in a more practical form. Taking concepts (ex: the car) and using that fundamental idea to create something minute and chemical to behave “in essence” the same way a car does. We have these chemical components “drive” across copper atoms. We start with the metaphor and find practical, chemical ways to execute the concept utilizing the physical laws and limitations in these strange, new worlds.

So…kick back and enjoy another exploration into the very, very, very,very small…