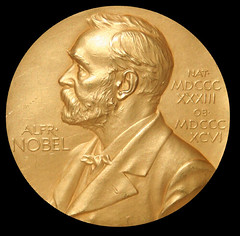 The 2016 Nobel Prize for Physics was announced. David Thouless, Duncan Haldane and Michael Kosterlitz were awarded the coveted honors for their work on “exotic states of matter” that can assume “strange shapes.”

So, what’s an “exotic” state of matter?

Most of us grew up with three states of matter: solid, liquid, gas. And, depending how much energy you put in, the state of matter could change. Water was always the easiest example. Very cold, water is ice. Put more heat in, water melts into liquid. Put more heat in, liquid becomes gas (vapor).

But, some years ago, scientists found that matter at extremely high temperatures could become plasma. Matter at this state could be found at the heart of the sun.

More recently, scientists found that certain matter at extremely cold temperatures could become “quantum condensate.” This was a state of matter not even created in a lab until the 1990’s.

Think of it this way: put our Quantum Cat in a Frozen Box!

Basically (according to the Royal Swedish Academy of Sciences’ paper on this year’s winners): 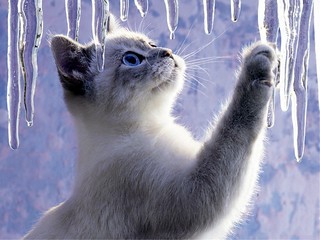 So, you effectively freeze quantum particles so damn cold that they start to move en masse (and more predictably, one would assume). At that point, you can see them more effectively. And study them more accurately.

“Strange things can happen in the cold. For example, the resistance otherwise encountered by all moving particles suddenly ceases. This is the case when electrical current flows with no resistance in a superconductor, or when a vortex in a superfluid spins forever without slowing down.”

The specific mathematical field the award-winning scientists are working in is “topology” which the Nobel Physics big-wigs have tried to explain using a bun, a bagel, and a pretzel (remember that joke that finishes “you can’t have half a hole”? keep that in mind).

So, some geek-speak for your lunch. Observe (explanation begins around 5:20):