We’re rolling into October. And that means PLAYOFF BASEBALL!!! The NY Mets are out of the race, but the Texas Rangers are still in the fight. So, to honor all those years ago when my dad took me to see the great NOLAN RYAN play during his last three seasons of pro ball, I wax a little eloquent about America’s pastime. And be sure to get a pack of these awesome playing cards! 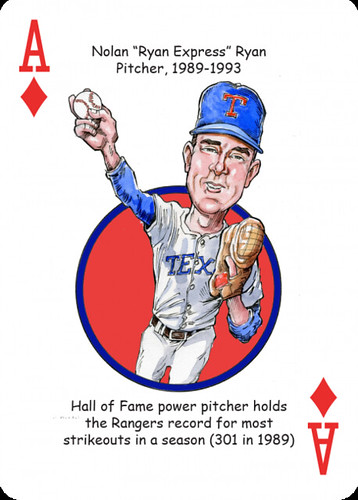 Sitting in the stands watching my friends’ softball game at Whitey Ford Field in Astoria two Sundays ago, I felt the sensation again and again and again. I was removed from time altogether. I became engrossed in the competitive meditation that is this peculiar bat-and-ball oddity with three bags, a plate, and a pitching mound geometrically placed on a wide field of dirt and grass. A team of nine players that had spread across the expanse stared down a single player with a metal rod in hand. A thick, heavy ball was thrown at the rod. The rod was swung. And everyone scrambled.

And then chaos settled back into stillness.

And then the cycle began again.

Stillness again. Another player with a rod. Another ball thrown.

Chaos again. And then stillness again.

And the cycle began again.

Repeat and repeat until the game was done.

I was completely outside of time as I knew it. The game was all that was happening. I watched the batting rotations and kept the pitch count and heard the metallic clunk of the aluminum bat and found myself in a wondrous dream state.

Repeat and repeat until all innings required are played.

Baseball is the one major American sport that has no clock. Basketball has 48 minutes. Football and ice hockey have 60 minutes. Soccer has 90 minutes. Even boxing has a set number of two or three minute rounds.

If, as a viewer, you need the dictates of time to stay involved, this is the most maddening sport imaginable.

If you treat is as Chekhovian drama, it can be riveting theater. Hidden glances and knowing nods. The subtleties of body language. Decoding hand signals. The steal. The sacrifice.

The error!! The most human element OF LIFE! And what other sport tallies human error as one of its MAJOR STATS?!

As with Chekhov – when it’s played well by capable performers – baseball is blisteringly good. A sport that makes you want to lean forward to get a closer look at the pitcher’s narrowed eyes. The batter’s clenched jaw. The outfielder’s stretched arm. Every nuance. Every detail.

While researching BOUNDED IN A NUTSHELL, I found myself talking baseball just as much as science with so many of the physicists and mathematicians I met with.

And “time” as we know it only exists in the human mind when you look at it from the perspective of a quantum physicist.

From a fantastic piece by Nick Stockton writing for WIRED.COM:

“The question of time’s arrow is an old one. And to be clear, it’s not whether time exists, but what direction it moves. Many physicists believe it emerges when enough tiny particles—individually governed by the weird rules of quantum mechanics— interact, and start displaying behavior that can be explained using classical physics. But two scientists argue…that gravity isn’t strong enough to force every object in the universe to follow the same past»present»future direction. Instead, time’s arrow emerges from observers.” 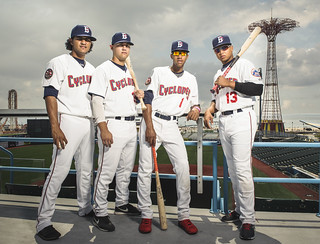 Forgive me waxing eloquent, but it’s why I continue to love the sport of baseball even as it loses some footing to other sports.

The game takes just as long as it needs to.

I make a point to get out to MCU Park every summer to see the Brooklyn Cyclones at least once a year because it spins the illusion of being out of time as we know it altogether. It’s the single best baseball atmosphere I have ever experienced. It’s a minor league game, so television broadcast concerns (TV commercial breaks stifling the flow of the game, etc.) are minimal. The game plays with a backdrop featuring Coney Island amusement rides and the Atlantic Ocean. A Brooklyn Lager in my hand and mascot Sandy the Seagull pumping up the crowd. Fireworks every Friday.

It’s summertime completely out of time itself.

So, I’m looking forward to escaping time as we know it for a little while this October with some playoff baseball and a few bottles of Shiner Bock Octoberfest and Coney Island Brewing Co.’s Freaktober Fest Big Ol’ Pumpkin Ale.

(Alas, if anyone knows where I can get Ziegen Bock (legally or smuggled) in New York City, let me know.