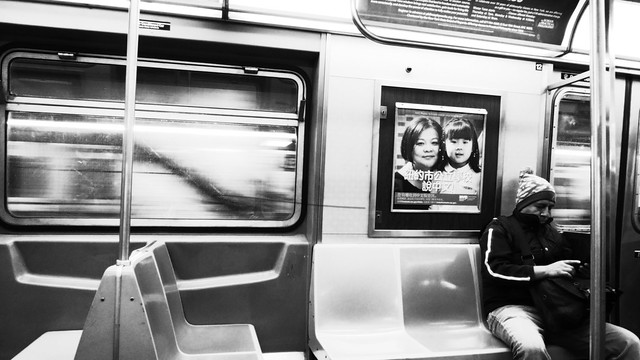 (We rejoin our Dharma Drunk heroes as they head uptown to the Bronx searching for Marylou’s dimly remembered bar.)

The subway nearly empties of passengers at the last stop in Manhattan.

The doors close and the train rolls on.

Marylou and I remain.

Along with one lone fellow across the car from us.

Only three of us in the train car now.

“Once more unto the Bronx, dear friends,” Marylou whispers to me playfully. “Once more.” She lifts her hand with a triumphant fist. “Or close the wall up with our Gotham dead.” She flares her fingers like snapping open a foldable fan and spreads them wide and straight, creating a perfectly formed Fosse jazz-hand. Gwen Verdon would have beamed with pride. Marylou shakes the hand vigorously like a chorus girl. “The game’s afoot.” And then she places the hand back in her lap.

We fall silent for a moment as I watch this other fellow on the train car with us.

I hear nothing for a few moments, save the rumble and rush and rumble and rush of the tracks beneath us. The subway moving through the tunnel into the next borough. I can almost hear that white-noise that underscores silence on long road-trips across middle of nowhere, America.

Just the driver, the passenger, and the road. No talking. No music. Just the sound of the car driving through time and space.

Marylou and I now on our own personal road-trip.

But without the car.

Racing through the ground on our way to track down one of Marylou’s distant memories. Looking for a place that might not be there anymore. Or the wrong place entirely.

Now just the three of us on the train.

Where is this lone fellow in his tiny story?

Rumble and rush. Only three of us on the train. That rare moment when the city has no clutter.

The tracks drone beneath us like a serene didgeridoo.

Is this lone fellow a Holden Caufield? A wandering misfit?

Rumble and rush. Only three of us on the train car. That rare moment when the city is clean lines and soft sounds.

Is he a Willy Loman? Is he the desperate salesman who keeps his family going as his own soul withers? Door after door after door. No end in sight down the endless row of houses and apartment buildings.

Would they publish this lone fellow’s life story? Too small? Too modest?

Where is he going? To work? To sleep? To his mistress? To his second family, the one he has hidden up in the Bronx, far away from the family he has stashed on Staten Island? A modern-day bluebeard who keeps his domestic options wide-open?

Or just a man trying to avoid two misfits mis-quoting Shakespeare’s HENRY V on the train with him?

Once more unto the Bronx, dear friends. Once more. Or close the wall up with our Gotham dead.

(Tune in Monday for the next installment…)