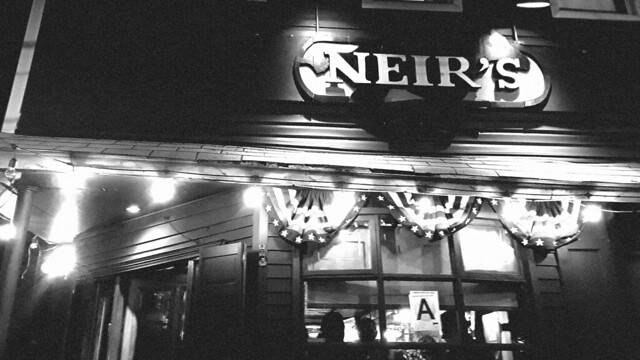 ‘After 190 Years, It’s Last Call at the “Most Famous Bar You’ve Never Heard of”‘ read the headline from the The New York Times last Friday morning.

My better half Kirsten sent me the link to the article as we finished up our morning coffee and I couldn’t resist making a pilgrimage that evening to this small, unassuming watering hole nestled in the Woodhaven region of Queens, NY.

Key scenes from Martin Scorsese’s GOODFELLAS were shot in this relatively small venue; the small stage in the back is where Mae West supposedly made her debut as a performer. 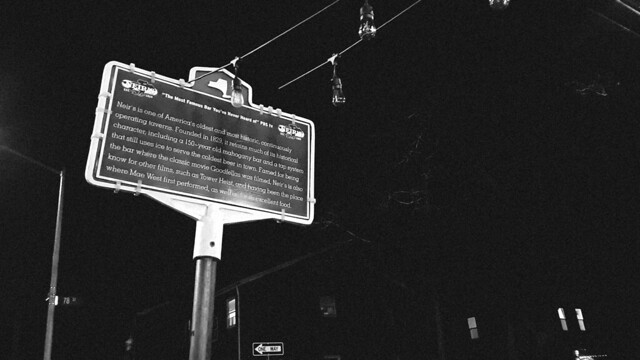 In a city like New York, the local bar becomes communal. The local congregation. We meet every Sunday to bet on the horses and watch the football game. We check in with our pastor (bartender). We take Holy Communion (Guinness, Jameson shot, etc.). We listen to the weekly sermon (Vinny explains how to regard red flags from troubled women by dissecting his third and fourth divorces, often just after partaking of his Holy Communion).

It’s always a heartbreak when the local bar faces closure.

Since beginning THE MARTINI EFFECT, one of my favorite pubs in the Woodside area of Queens had to lock its doors and shutter its windows due to a landowner’s new lease (RIP, Cuckoo’s Nest). 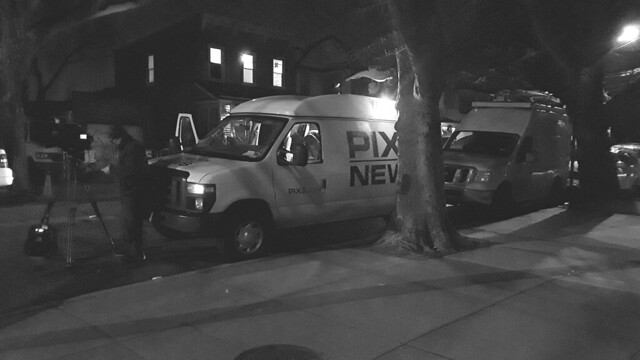 The local bar is community in an age when physical community is dissolving.

Word quickly got out that Neir’s was closing and I was met with an enthusiastic crowd of locals and curious out-of-towners that wanted to have one last round in what many believe to be the one of the oldest continuously operating bars in the country. Even the local news crews wanted to catch some on-the-fly footage of the bar during its eleventh hour.

The bar-tending crew was clearly overwhelmed, the pair of beleaguered bar-mistresses generally accustomed to a quiet, Friday night happy hour crowd of a dozen or so drinkers, not the capacity crowd of curiosity seekers who wanted to pass through these hallowed walls and touch the famed mahogany bar that has likely existed longer than Queens has been a proper municipality.

People drank as they shot photos and took videos with their phones.

Capturing these final moments with the soon to be departed.

I found myself at the elbow of the bar and had a few Jacks-and-soda in honor of this small anachronism on a seemingly random corner in the relative middle of nowhere, Woodhaven. Not so random when you consider that the Union Course Race Track used to be just across the way. Neir’s would host the horse players before they would head off to place their bets.

Is this a dive bar?

One of the locals (retired air-traffic controller from nearby JFK Airport named George) and I begin discussing this as I tell him I’ve been constructing this beat-poet styled photo novella about local bars in New York City.

What constitutes a dive bar?

We quickly devise some basic rules (can we call them Dive-Bar Commandments?):

1.) Neither the bar nor the shelves the liquor reside upon shall glow (I will fight anyone who disagrees with this to the death; this is something a hip, trendy bar in Midtown can have, but not any drinking venue we would consider a dive or a haven for local drunks).

2.) Nothing garishly artisanal shall be served (if there’s a large chalkboard with a multitude of beers and their ABV – Alcohol by Volume – listed handsomely behind the bar, you’re not drinking in a dive, you’re drinking with hipsters in a Brooklyn joint; the beers are often fantastic, but I don’t care how grungy or crestfallen the heavily bearded bartender looks, he’s not nursing a broken life, he’s pissed that his screenplay didn’t sell).

3.) If the bar has a television (not a requirement), thou shalt have at the very least one small television showing the horse races (this TV is usually sequestered to the corner of the bar and has at least two or three men over the age of 65 watching it intently with their daily racing forms, do not confuse them with the random retired college professor who spent his midlife years teaching theoretical physics until he drove himself crazy and couldn’t maintain the curriculum anymore, they often look similar from a distance).

4.) Thou shalt have a jukebox that is not connected to the internet (this one becomes more and more difficult to maintain as the internet jukebox has become more and more ubiquitous due to the proliferation of wi-fi; the internet is practically a utility in this day and age, so it’s easier than ever to connect the jukebox to the ether for a fraction of what it used to cost, but I always believed that a jukebox stocked by the local management felt like the unique fingerprint of the bar).

5.) The average age of the bar’s denizens should be between 60 and 65 (see Commandment 3 for reference).

6.) The bar cannot have more than three televisions showing sports (and three is a luxury; also note that these televisions can only show football, basketball, baseball, and the occasional hockey game; none of these televisions should be showing soccer or rugby; if these establishments open earlier than 8AM for the purposes of showing Premier League soccer or Premiership rugby, these are pubs in dive-clothing or recently opened soccer-chic bars that popped up next to the garishly artisanal gastro-pubs – see Commandment 2).

7.) The bar shalt not have any sort of menu (I might go further and say a proper dive-bar shouldn’t have a kitchen at all, perhaps the occasional toaster oven that serves up meat pies in a fashion not unlike Sweeney Todd; double dive-bar points if the meat pies utilize flesh donated from the Demon Barber of Fleet Street).

8.) The bar shalt not offer Trivia Night (proper dive-bar drunks can’t remember their ex-wives’ names, much less how many games did the New York Mets play before finally pitching a no-hitter; Answer: 8,019; let that sink in, Mets fans; who the hell trades away Nolan Ryan??? – addendum: Karaoke in dive bars is usually fine as there is nothing more late-stage drunks like to do than attempt to recapture their glory days by singing “Me and My Bobby McGee” by Kris Kristofferson – often in Janis Joplin’s key – at the top of their lungs; note that all dive-bar vocalists must perform their songs badly; if an NYU Musical Theater student takes the stage singing Sondheim with relative ease at this Karaoke session, the bar’s status as a “dive” will likely be revoked).

9.) Bar staff shall not wear matching T-Shirts or Uniforms of any sort (if the bar has resources enough to get their logo stitched on a polo-shirt…hell…if the bar has resources to get a logo designed in the first place, they probably have enough capital to ditch the toaster oven, fix up their kitchen, and get menus printed – see Commandment 7).

10.) If you’re a woman traveling single, thou shalt think twice before entering if you’re not a regular (this isn’t to suggest that anything untoward will ever happen to a woman upon entering a proper dive-bar – above and beyond the regulars giving a slightly annoyed glance that said woman has invaded their sanctum, but nearly every woman I have ever talked to has expressed some dismay about entering any establishment we have deemed as a dive-bar without some sort of companionship, whether it be male or another female; this speaks to the harrowing beauty of dive bars, they’re often a little terrifying for the inaugural visit; the secret is to walk in like you don’t care what they think, don’t order anything too complicated, and tip well; they’ll usually welcome you back with open arms, as open as they’ll get considering most of the occupants are a few drinks ahead of you). 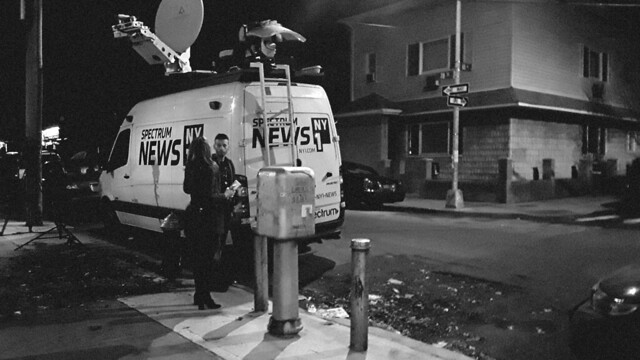 As George and I rattle through our commandments, word comes down from the news anchors that the mayor will be visiting the bar with good tidings.

The bar is being saved and will not have to lock its doors and shutter its windows after the upcoming weekend.

A new lease is being brokered to save one of the oldest bars in the city.

It’s a bittersweet joy when I think about many of the other great bars that did not get to enjoy this stay of execution.

I fondly remember Cuckoo’s Nest and Station Bar off the 7-Train and how they weren’t able to survive the real estate hikes of their landlords. The savage state of affairs that is livable, rent-able space in New York City proper. A painful reminder that we live on a collection of islands, and space is at a premium.

The one thing they can’t make any more of.

You travel for a little while and you suddenly hit the water.

Nowhere to go but back from where you came.

And everyone wants to be here.

Maybe that’s why bars are so important in this town.

An excuse to stop and slow down.

Trade fours with a fellow human being, watch the horse races and the football game, and forget that this is a city where things are constantly being built up and being torn down.

Drinking at the center of the world.

Where there is heat and molten rock and crushing gravity. 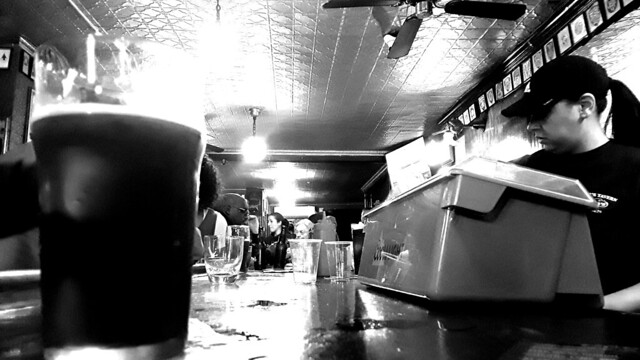 I look down the bar and think of Robert DeNiro smoking with his cool, calm panache as “Sunshine of Your Love” by Cream underscores his long take in GOODFELLAS (scene posted below).

I touch the mahogany bar and realize this hunk of wood is older than anyone drinking at it right now. This mahogany bar is of an age no one ever gets to be.

“According to the Queens Chronicle, the restored mahogany bar was originally installed “when Ulysses S. Grant was in the White House.”

Queens wasn’t incorporated as a borough until 1897.

The bar I’m drinking at is older than the borough.

I take a few minutes and talk to Ed from the Woodhaven Historical Society who has been working on getting the building protected as a landmark.

Again, bittersweet when you consider how many great buildings have not been able to afford these same endorsements or receive these same protections.

But that’s New York City. I have always felt that its reverences are more reserved for its ideals and less for its landmarks.

Because space is at a premium.

The priceless value of land on an island.

And they’re not making any more of it.

I finish my drinks and make my way home, wanting to avoid the additional crowds that will visit the place once the mayor arrives.

A deal has been brokered and the bar has a new 5-year-lease.

So, drinks still available here until 2025.

Maybe Ed will get the place sanctioned and this little corner of the universe will have the same amenities as a number of the landmark churches in downtown Manhattan.

Because we’re social animals and we still need our congregations.

Even if we need to drink to tolerate each other.

So, a toast to the hole-in-the-wall caverns where we make merry, nurse our existential wounds, forget about the grind of the city for a few hours, bitch about our lovers, try to meet new lovers, bitch about the boss, listen to the jukebox, overindulge, find our closest mates, lose that extra twenty somewhere in the toilet, love, laugh, and trip the light fandango (doing cartwheels cross the floor, ala Procol Harum). 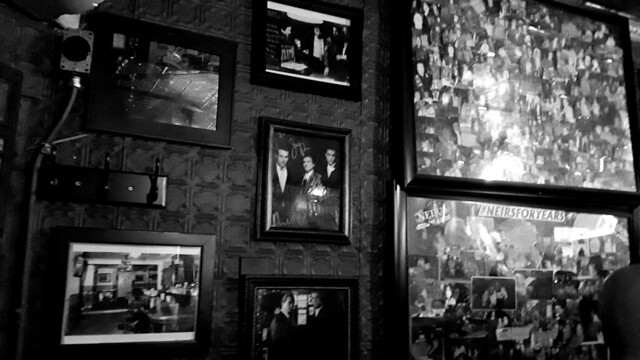 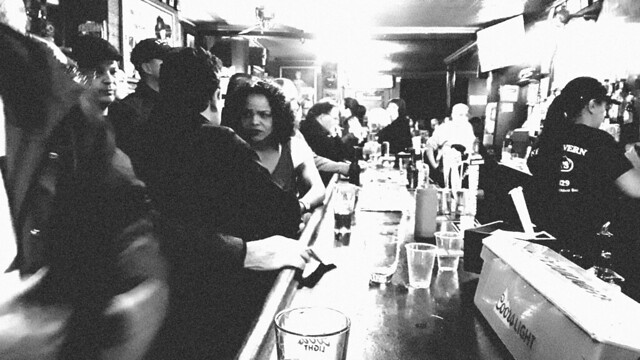